For me the theme of this fortnight's Challenge at Here Come The Boys was no Challenge at all... it's "Use A Digi" and I LOVE my digis :-) 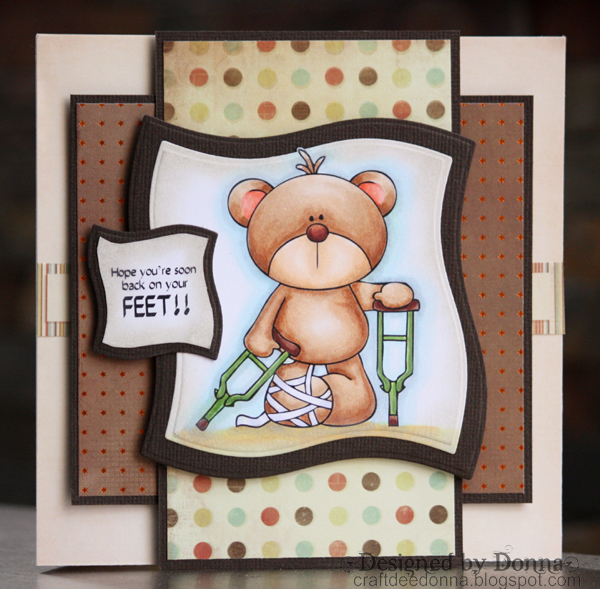 As some of you may know, my son Matt is in hospital at the moment having seriously injured his foot (he has had two toes amputated last week, more surgery to follow) I thought this cute little fellow from The Stamp Fairy would cheer him up - as much as possible.  Gem of a Challenge has Teddies as their challenge theme so I'm entering there,
I used the sketch from  Papertake Weekly, this is "this week's" sketch though they have a Sketchie Free For All so I could have chosen any one of their previous fab sketches :-) 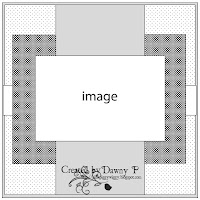 Now, one of the reasons I LOVE digis is their flexibility. This image (Get Well Barry) actually came with the bandage on the other foot - by simply flipping the image horizontally in Word the bandage appears on the right foot, which is the right foot as in the same foot that Matt has injured.  Hobbycutz wants us to use something Beginning with H - my teddy is "Hurt" so I'm entering there with my tongue firmly planted in my cheek - and I'm entering Cards for Men Let's Get Sporty challenge on the same basis; even though Matt was hurt at work (he's self employed so, no, not Workers Compensation!) and not doing sport :-) 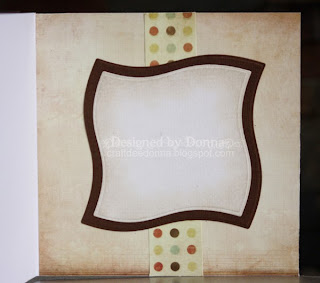 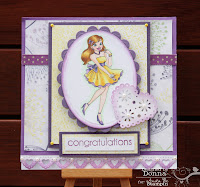 I thought this was very clever, exploiting the mirror image effect, until I looked at this card I made for an engagement some time back when I flipped the image simply because I liked the look of it better that way... then realized that it means the young lady now has her engagement ring on the wrong hand!! OOPS! Nobody said anything, ah well got away with that one :-)
I coloured with Copics, and made the sentiment in Word - Matt is confined to bed with his leg elevated on a James Cushion 24 hours a day and he can't put any weight on the injured foot for another seven weeks, longer if the doctors decide tomorrow he needs more surgery so I'm sure he's looking forward to getting back on his feet. 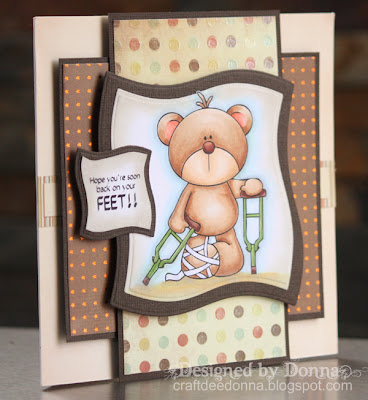 The papers are from Kaisercraft's Up Up and Away Collection, The stripy horizontal panel is one of the die cuts from the pack.  The chocolate cardstock is Bazzill, I  think. I used more of the same inside.  All the panels are cut with Nestabilities Wonky Squares, I don't know why, I just think of them as most suitable for masculine cards, lol.
Simon Says Challenge, Stampin' for the Weekend and Stamping With The Dragon all have Anything Goes challenges so I'm entering them too.
That's about it for my card... I think I spun a long enough tale about a card that has absolutely NO embellishments on it, lol.
Pop over to the Here Come The Boys Blog and check out the rest of the team's inspiration - awesome as always!  Hope you get a chance to enter the challenge too, Use a Digi... what could be easier?!
On a personal note, I'd like to thank all you kind people that have been sending Cyber Hugs for Matthew and us - it means a lot.  He has lost his toes completely, including the webbing, which is a disappointment but he is handling it very well, which helps us to do the same. 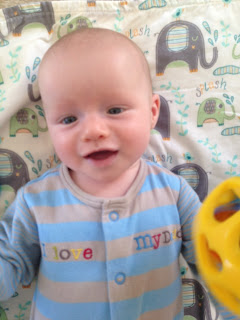 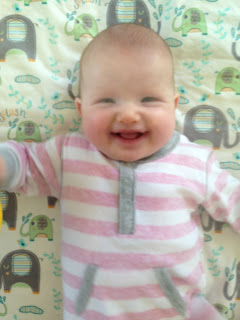 He misses his babies, (I thought I'd add the pictures I took on my phone to send to him the other day, we send pictures and videos every day, thank goodness for iPhones and the internet!) but we all met in Fremantle today so he could come out of hospital for a few hours to have a cuddle with them - the first time he's seen them in nearly two weeks, it brought a very large lump to all our throats.  With any luck, for which we are surely due, he can come home at the end of next week and hopefully get signed over to a surgeon at a hospital closer to home for any future surgery and rehab.
I am taking my parents down tomorrow morning to see him, they haven't seen him for a week - it's just so hard to coordinate it all, then I'm bringing them back home and going to Matt and Elaine's to do the afternoon shift feed/bath/bed routine with the babies.  My hubby will have to fend for himself - he may savour the peace and quiet after the hectic three weeks we've had, lol.
Anyway until next time, Happy Crafting (and have some for me while my craft time is so restricted!) Donna
Posted by Craftdee at Sunday, June 30, 2013

Your card is so perfect for the time in your life right now. So relieved to hear he is now finally on the mend. The two bambinos are super cute.
Hugs Desíre {Doing Life}

A lovely creation. Thanks for sharing with us at A Gem Of A Challenge and good luck.
Mags
x

Love this fab card, great papers layout and image.
Thanks for joining us at a gem of a challenge
Hugs Kelly

This is so cute! I love the use of the wonky squares. i just got those not too long ago and love to see how other people have used them.

Your card is wonderful Donna. I love that image, how clever to flip the image to make it perfect for your Son. The papers and fab and I agree, the wonky squares work so well with male cards.
Its good to hear that Matthew is handling everything so well. Oh, he must miss his babies so much, I hope he is allowed to go home soon.
take care, sending you all hugs
Sue xx

Gorgeous card. The image looks fab and perfect for your Son. I hope he is doing well (as he can be considering). The photo's of the twins are fab - they look adorable, so cute.
Lorraine x

Gorgeous I love the colours you used and the lovely design. Thank you for joining us over at the Simon Says Stamp challenge. Hugs, Dawny x

Adorable, gorgeous card.
Have everything crossed for you that he comes home to his babies soon.
luv
Debby

Fabulous image and I love your colour choice to. Thanks for joining us at CFM, good luck with the challenge. hugs Shirleyxxx

Thank you for sharing with us your lovely creations across at Hobbycutz. Good luck in the draw...
all the best with your son!
Crafty Hugs
Denise
http://dixicreations.blogspot.co.uk/

Great take on the sketch! Fab coloring and such a sweet image. Thanks for joining us at Papertake Weeky :)

Fab card, love your choice of image and backing papers, you colouring is so cool. That card would cheer anyone up when they are down.
Thanks for joining us at Cards for Men
Hugs CAZ

Beautiful card, and so well executed. Great coloring and I love your choice of papers. And the wonky squares! Wishing Matt a speedy recuperation, and thanks so much for joining us at A Gem of a Challenge this week!

Hi Donna, Your card is Brilliant! and so clever to flip it around..I wouldn't have thought of it :0
So happy to hear Matthew is doing ok sorry it came to losing his toes though.
Glad he had chance to get a cuddle from his gorgeous little babies, it will keep him going till he gets home.
Keeping you all in our thoughts xxxxxx
Mau xx

Gorgeous card hun, I'm sure it will cheer him up no end!