The card I have for you today is one I made for my sister in law last year.  The "Eclipse" style was all the rage at the time and I made a couple of cards in this style, this was the first - and I learned a few things from it, not enough to make no mistakes on the next ones, but at least different mistakes :-) 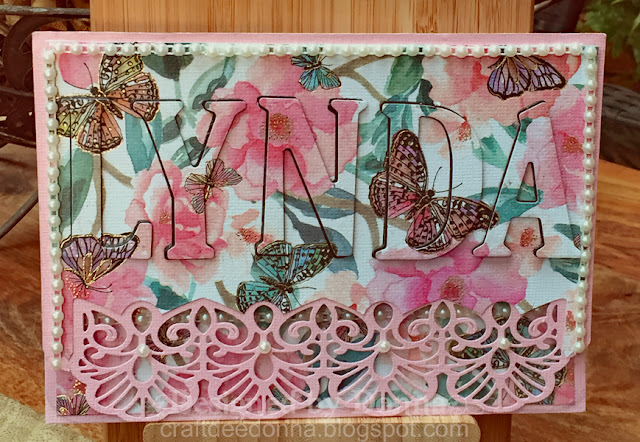 The paper I used for this card is absolutely lush in real life, with a soft textured finish, really good quality printing and gold foil details... of course none of that shows up in the pics, lol
I made an easel card, I love them and my sister in law does too... and it's a good chance to show the "eclipse" effect off with it's different angles.  I cut the edge with a Sue Wilson border die, the pink card was a bit light to support the weight of the card front (with all the added layers under the letters) so I backed it up with some acetate, I cut the corners with a curved corner cutter - so it doesn't spike you! 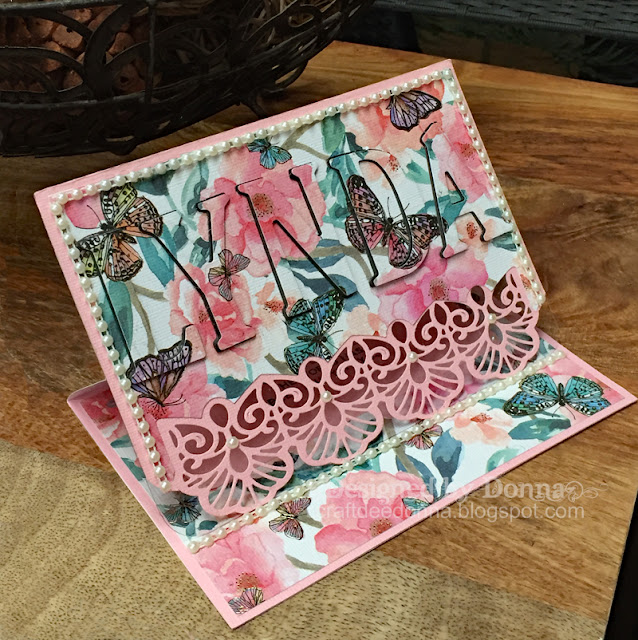 The letters were from a die set I bought from AliExpress, they are 3" tall.  Here's a link to a tutorial showing the Eclipse technique, it's one of the (many, lol) videos I used to learn.  I used three layers of black card to raise the letters up. 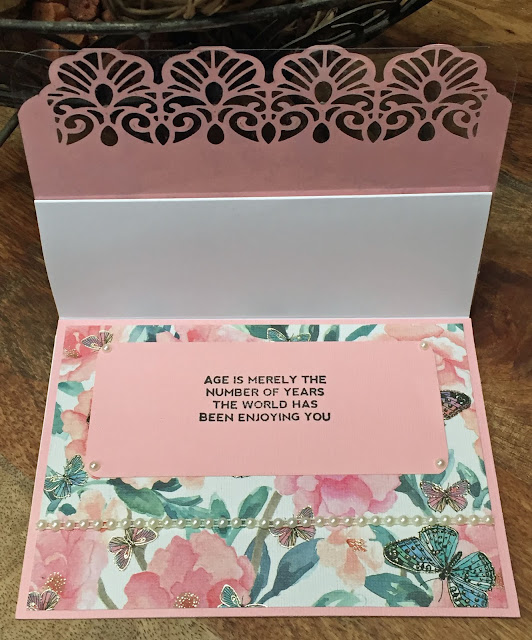 The pearl trim is from my stash, actually it's some my lovely Mum brought back from Malaysia on one of her many trips... I've been loathe to use anything she has given me, knowing that once it's gone it's gone, but my SiL absolutely loved my Mum, so it felt "right" to use it


I used sticky back pearls from my stash on the centres of each "medallion" on the border die too.  The inside of the card was finished very simply, with just a strip of the pearl "ribbon" as a prop for the front of the card.  The sentiment is a stamp from Kaisercraft


That's it for today's card.  I would like to enter in the following challenges:


Cardz 4 Galz Wings
Crafty Cardmakers  Challenge #239 It's a Bug's Life
Double D Challenge Pearls, Gems or Rhinestones
As You Like It Favourite: Pink and Green or Blue and Orange and Why... I love all colour :-) I love Pink and Green together - perfect for pretty flowers AND butterflies
Cutie Pie Challenge My Favourite Colour... again, I love all colour.  Pink and teal green look so pretty together
Allsorts Challenges Feminine
Crafty Hazelnut's Patterned Paper Challenge Use Patterned Paper
Through the Craftroom Door, Digi Choosday, Crafty  Creations, Crafty  Creations,  Creative Fingers, Li'l Patch of Crafty Friends, Polkadoodles, Gem of a Challenge, A Perfect Time to Craft, Creatalicious Challenges, Crafting With Attitude and Corrosive Challenge all have Anything Goes
That's it for today.  I have to make a Father's Day card (or two!) for next Sunday... my Dad is deep in the throes of Dementia now, and doesn't know me from a bar of soap, but we still celebrate all the events and I still like to make his cards.... and he still likes the chocolates I always give him, especially so now; the only things he'll eat are sweet - sweeter the better!
Until next time (which may be after the next stage of my dental surgery, which is bringing it's own set of issues, tba) Happy Crafting, Donna
Posted by Craftdee at Sunday, August 25, 2019 21 comments:


The card I have today was the card I made for my eldest son Matt's 36th birthday in 2017... just getting around to posting it... and no, it's not the oldest one in my Drafts folder, lol. 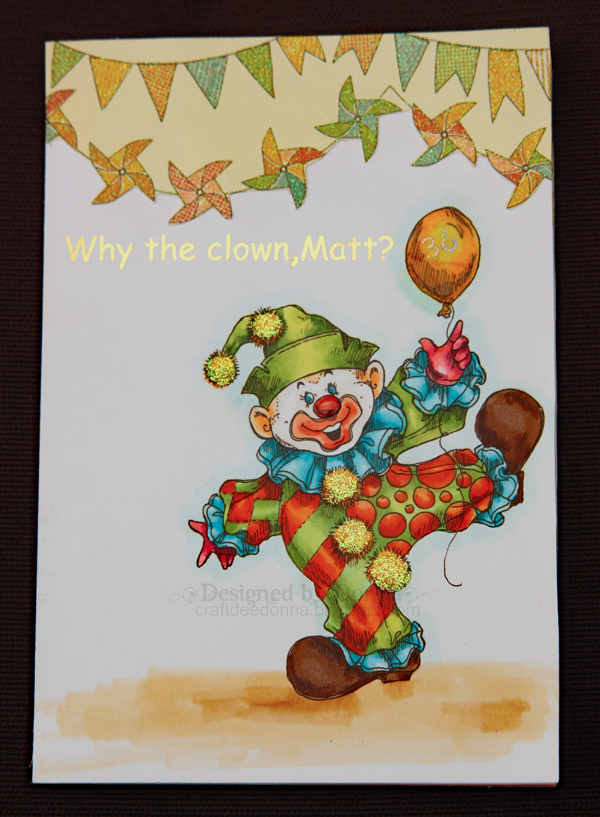 Matt has coulrophobia - a fear of clowns, so being a loving Mum I'd thought I'd tease hm about it.  Well, not really... I actually thought he'd got past this more than he has, he is very much better than he was... and it such a nice clown, but.... ah well.  We are a "jokey" family, he took it in the spirit it was intended, thank goodness. 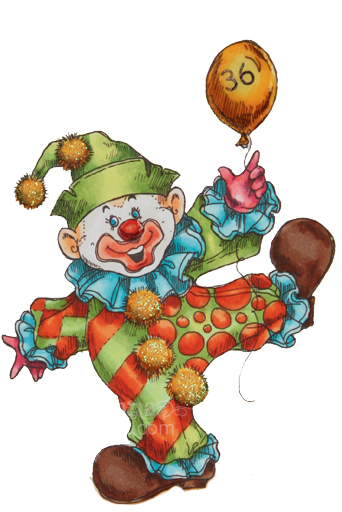 The image is a digi from Rick St Dennis called, unsurprisingly, "Clown with Balloons".  I coloured with Copics adding some deeper shadows with Prismacolor pencils.  Glossy Accents to the balloon after adding the numbers "36" with my laser printer and then foiling them in iridescent foil with the laminator (hard to see in the pic, pretty effective IRL.  I added some fluffy/glittery cotton balls cut in half on his costume and hat (they DID try to fall apart, but I got 'em, haha)
The paper is from a Kaisercraft pad, I only had a bit of the paper on the front left, so I cut around the edge of the windmills to give a banner-like effect. I used more paper from the same pad and used the same technique to cut around the flags on the piece I used on the inside of the card, and some more scraps to make the pocket to hold the gift card that was Matt's present
I also foiled the computer-generated sentiment using the laser printer/laminator technique, not that it looks shiny in this pic, mind you the glitter on the DP doesn't show up either, sigh 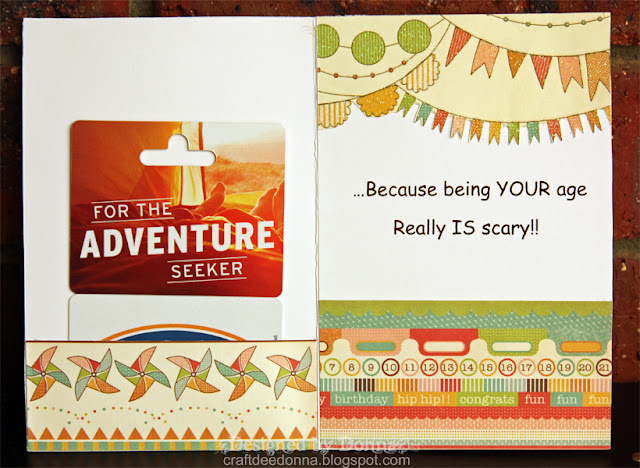 That's it for today's offering.  We are still (technically) in winter here, though the weather has been really very nice (not that winter is ever "bad" here... I've lived in England and Wales, I know the difference, lol) so I've (technically) got a bit more crafting time on hand.  It hasn't quite panned out yet, but I live in hope :-)  Work is very quiet, beyond the seasonal slump... the economy is pretty sluggish at the moment and hubby and I are enjoying a taster of (semi) retirement... gotta say, we are now not worried that we'll be bored when we DO retire, we are busy, busy, busy, lol.  My "other" bookkeeping clients are in the same boat, same industry more or less so no surprise THERE! If we go back to boom times I think I'll give them up, I'm enjoying the pace I'm at much better, One Power Ball....
Anyway, I'm entering my card in the following challenges:


Little Red Wagon Digi Do (Use a Digital Image)
Aud Sentiments For a Child + a Sentiment (Matt's my child, and it IS a "child" image, so I hope my entry fits the bill)
Sweet Stampin' Spots and/or Stripes (Spots and stripes on the clown's cossie)
Crafty Hazelnut's Patterned Paper Challenge Use Patterned Paper
Pixies Snippets Playground Use Snippets (The piece on the front)
Send a Smile for Kids Anything Goes for Kids (Again, this is a "kid" image, hope it's okay to enter)
Catch The Bug, Cute Card Thursday, The Paper Shelter, Simon Says Challenge, Through the Craftroom Door, Digi Choosday, Crafty  Creations, Creative Fingers, Li'l Patch of Crafty Friends, Polkadoodles, Gem of a Challenge and A Perfect Time to Craft All have "Anything Goes" 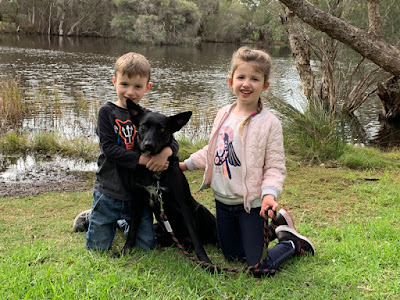 and I thought I'd add a picture of "the new dog", not ours... our son said he would leave it until little Rocky was gone before getting another dog.... true to his word, now Rocky is gone, here's Miss Molly with her new owners, The Twins
She is a sweet girl, and the kids love her... unlike her previous owners from whom she was rescued... so sad, but now not, she's landed on all four soft little feet :-))
Until next time, Happy Crafting, Donna
Posted by Craftdee at Sunday, August 04, 2019 17 comments: