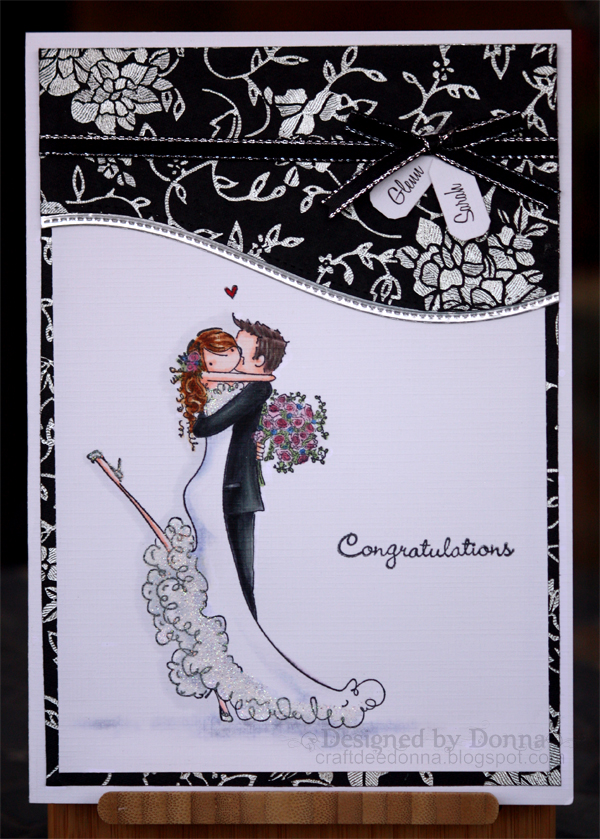 I've used an actual STAMP for this card... it's such a beauty and not available as a digi so I just HAD to, lol.  It is Stamping Bella's Brett and Brenda Get Married.  I stamped (woops, nearly said "printed" as I'm so used to using digis) on linen card, it works extra well for images that have fabric on them, I think, Brett's suit looks very swish for example :-)  I had to stamp it four or five times before I got a "good" one...NOW I remember why I love my digis - actually NOW I know why I asked Santa for a stamping platform... what a difference, I'm stamping more (and buying more stamps, lol) than ever now I have one - and not wasting anywhere near as much 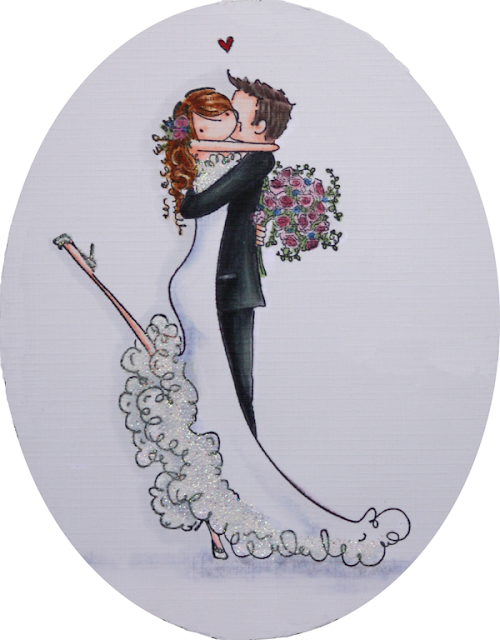 I coloured, as usual, with Copics, adding shadows and highlights with Prismacolor pencils.  I embossed the glitter on Brenda's dress with Ranger's Bridal Tinsel EP.
The black and silver DP is textured... the silver is embossed - it really is gorgeous paper, bought from my most favourite "special paper" shop Starfish Lane.  I cut the top panel with (I think, from memory) with a Spellbinders Curved Borders die, matted it on silver card cut with the same die. 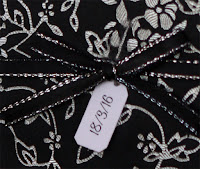 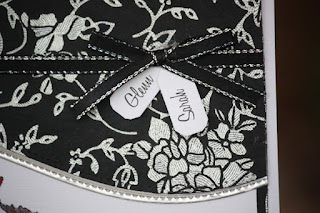 The "Congratulations" came in the stamp set, I made the little tags with the bride and groom's names on adding them with black and silver ribbon saved from a gift, I like to personalize cards where I can - particularly for weddings and babies... the bride and groom really liked it, so all good 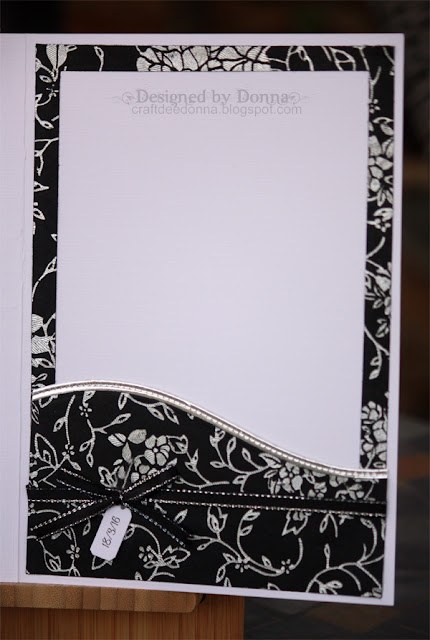 I finished the inside using the same paper for the front, we gave the couple money as their gift so I switched the decorative panel that was at the top on the front to the bottom so I could use it as a pocket for the money.  More of the personal touch here;  a tag with the wedding date on it.  I didn't have enough of the black and silver paper to cover the whole inside so I cut a frame... I actually did that on the front too, using the "cut out bit" turned 90 degrees to make the shaped panel -meaning I got a LOT of coverage out of the last bit of this super paper from my collection; I'm such a lucky girl... my son bought me a "Starfish Lane" voucher for Christmas, so I'll be topping up my (already embarrassingly large) stash of "special paper" soon, I really hope they've got more of this one


That's it for my nephew's wedding card, I'd like to enter it into these challenges:
As You Like It Favourite Way to Add a Sentiment
Cardz 4 Galz Stamping (No Digis)
My Time to Craft Monochrome
Crazy 4 Challenges #420 Add a Heart
Crafty Cardmakers Love and Romance
Allsorts Challenge I Spy... Something Beginning with B  - B is for Bride
Hanna and Friends Favourite Stamp
Pixies Snippets Playground Use Snippets - Oh yeah, the black and silver is ALL scraps :-)
Cute As A Button, Little Miss Muffet, Through the Craftroom Door, Digi Choosday, Crafty  Creations, 4 Crafty Chicks, Crafting With Friends Challenge 61, Creative Fingers,Li'l Patch of Crafty Friends,  Polkadoodles, A Perfect Time to Craft, Crafty Hazelnut's Patterned Paper Challenge, Create and Inspire, Creatalicious Challenges, Simply Papercrafts. Crafting With Attitude and Corrosive Challenge All have Anything Goes challenges
Okey Dokey... with any luck I'll be back much sooner next time: it was our Anniversary last weekend, "Ruby"... 40 YEARS!!  Let me tell ya, it's gone FAST
It was also my son's birthday last weekend... he was 37 on Saturday; it was all arranged to go to a new, very flash Mini Golf (that he was involved in landscaping) place on Saturday afternoon... long story short, we got a call at 10.30 Friday night from his wife telling us he was on his way to Joondalup Hospital in an ambulance having just had a bad reaction to an antibiotic, the first in a course of pills he's had before (when he lost his toes) without reaction... the paramedics took 20 minutes to stabilise him before they could go to the hospital.  He had a "biphasic response" (secondary reaction) sometime later, spent until the next evening in hospital - forget golf!  He came to ours instead - he still looked like a red MM even then.  He has had anaphylaxis before (guinea pigs, lol) but this time they said it was anaphylactic shock, which is different (worse?) - poor Matt

We are going to a very nice hotel (Crown Towers Perth) for a couple of days as a belated celebration of our anniversary, I'm taking Mrs McLappy so you never know, I may get some bloggin' done :-))  Until next time, Happy Crafting, Donna
Posted by Craftdee at Saturday, February 24, 2018

Great card for great for our 'I sky' theme at Allsorts challenge and there's another 'B' in there - Bow, many thanks for joining in.

The design layout here is gorgeous! Love the "swooping' lines and colors! The sparkle is perfect on her dress! I agree, a stamping platform makes life so much easier! Thanks for sharing with us at Digi Choosday! ~Katrina

Oh I just love this Wedding Card and of course the Black and White feature really shows it off beautifully. A gorgeous image and beautifully coloured too. Great work, I love it. Thank you for sharing with us over here at "A Perfect Time To Craft" and best of luck with your entry.

What a fabulous card with such a beautiful image, thanks for sharing at MTTC this week.

Beautiful. Thanks for sharing at Cardz 4 Galz.

Beautiful Card! Love the scallop edging and fun layout Thanks for playing along with the challenge at Little Miss Muffet Stamps!

I love everything about your card! Gorgeous image and great design.
Thank you for sharing with us over here at "A Perfect Time To Craft" and best of luck with your entry.

A really lovely card. Thank you for joining us at Cardz 4 Galz. Sian.

wow! your card is so beautiful!
Thanks for joining us at the Hanna and Friends Challenge blog.

Stunning card! Thank you for joining our challenge at Lil Patch Of Crafty Friends!
Tracyx

Beautiful wedding card. Great image and pretty CAS design.Thanks for joining us at Through the craftroom door this week.

Oh how elegant. What a lovely creation! Thank you so much for joining us at Polkadoodles Digi Choosday and best of luck with your entry.

What a gorgeous wedding card! Your image is beautiful and I love that you put their names on the tags - NICE! Thanks for joining us at 4 Crafty Chicks this week xoxoxo

Great card, I love the black and silver and the bit of bling on the gown. Thanks for sharing your creation with us at Creatalicious. We hope to see you back again.

Fabulous card Donna! I think the design is gorgeous and LOVE the happy couple!

Hope your son is recovered by now - that's scary stuff!

Lovely to see you in the Snippets Playground.

Gorgeous! Thanks so much for joining us at As You Like It Challenge!

Lovely card, adorable image.
Thank you for sharing at Allsorts 'I Spy B' challenge this week and good luck x Susan x

Love this stamp, I've got it too and have actually used it more than once, which is very good going for me! Gorgeous card :o) Hugs, Lisa x

PS. my Uni Posca pen is a recent purchase and I'm loving it so far, so much better than the rubbish white gel pens I've used before x

Better late than never! Such a gorgeous card! Thanks for your entry to CraftyHazelnut’s February Patterned Paper challenge!
~~Heidi @ My Little Stamping Blog

Thank you for sharing with us over here at Polkadoodles Challenge blog
https://polkadoodle.blogspot.fr/

This is absolutely wonderful! Thank you for participating in our challenge at Allsorts this week!

Your card looks amazing! Thanks for join us at hanna & friends!
Hugs Jasmin

A gorgeous card!
Thank you soo much for taking part in our "anything goes with optional for a boy / man” challenge over at Creatalicious & good luck in the draw.
Hope to see you again in our new challenge as well…


PS: Sorry for the late comment, life had been very busy these past weeks…

Donna, please come back over to Creatalicious Challenges. There's a surprise waiting for you.