BBQ in a Box

G'day from WA :-)  The project I have today is a card-in-a-box I made for my son Chris's birthday... in 2015! (Well his birthday IS at the end of November so it's not as dire as it sounds, lol)  We bought him a barbecue as his gift so I thought I'd make a card that went with it 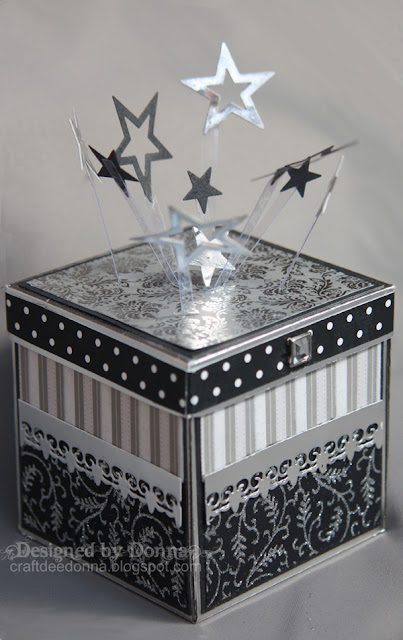 I thought the black and silver was "manly", and the papers I used were, in fact, part of the box of goodies said son bought me for MY birthday - he likes to know what he has chosen is "useful" to me so it gives him a buzz when he sees it "in action".  The black with silver glitter on it is a tissue sort of paper, the snippet of grey and white stripe is flocked and the silver and white on top is foil; all the food groups covered there :-)  The black and white polka dot strip is also paper, though I could just as easily have used ribbon.  The stars (MFT Die-Namics Stacking Stars) on the top are attached to acetate strips,
I made the whole box from silver card, the decorative strip around the middle is cut using a die.  Of course the real feature of a "card-in-a-box" is what's IN the box... so here it is 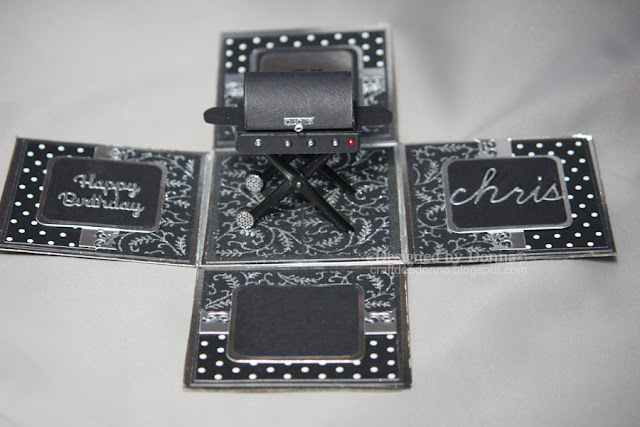 Obviously, all the same elements used on the inside as on the outside... plus black leathergrain card. The barbecue is made from that card, the legs are black straws with an eyelet joining them and the wheels are Card Candi I've had in my stash for years. 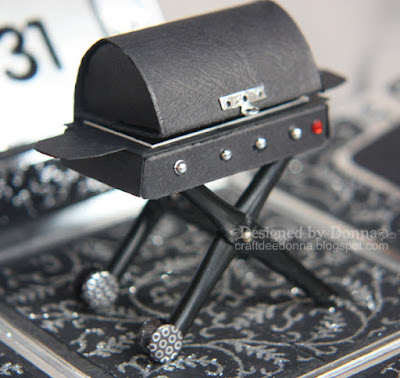 The controls on the bbq are silver flat back "pearls" and the red "light" is a hole-less pearl.  I used a jewellery finding (the type that you use to have a multiple string necklace) as a handle for the bbq lid.
Having a son called Chris is handy sometimes... the "Chris" on the right-hand panel was cut from a "Christmas" die, Memory Box I think, the Happy Birthday is an Elizabeth Crafts die and the 31 are Kaisercraft
The lid of the barbie opens too: I wish the plate of MY barbecue was as clean and shiny as it is on THIS one, lol 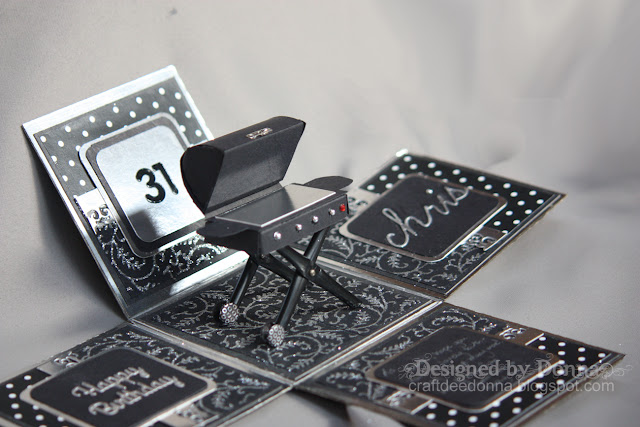 That's about it for my bbq in a box.  I would like to enter it into the following challenges:

As You Like It: Favourite Die and Why - "Chris", from the "Christmas" die... I love it because I love Christmas, use it a lot ... and the die cuts nicely too :-))
Card Mania Challenges Monochromatic
Crazy 4 Challenges #419 "Opposites" - black and white
Fab'n'Funky Challenges With a Number
Allsorts Challenges Old Favourites - the Christmas die, and those silver "pearls"
Pixies Snippets Playground Snippets (striped paper)
Crafty Hazelnut's Patterned Paper Challenge Use Patterned Paper
Tuesday Throwdown, Aud Sentiments, Through the Craftroom Door, Digi Choosday, Creatalicious Challenges, Paper Creator Crafts, 4 Crafty Chicks, Li'l Patch of Crafty Friends, Polkadoodles, Crafting With Friends Challenge 59, Corrosive Challenge, Little Miss Muffet, Create and Inspire, Crafty  Creations, Creative Fingers and Simply Papercrafts all have Anything Goes Challenges
I'll be back soon (hopefully) with another offering, quite likely from my drafts... though I have been adding to THAT recently so it may not be an "old" make.  Until then, Happy Crafting, Donna
Posted by Craftdee at Monday, January 29, 2018

No WAY Donna!! What a stunning card - it's just fabulous! And you know what - at first I thought you'd posted a photo of the actual BBQ - fooled me at first. LOVE it!

So creative! Wow, this is such an amazing little box; great colors, design, well....everything! Thanks for sharing with us at Digi Choosday! ~Katrina

A fabulous project. Thanks for joining AYLI challenge. Elaine

This is a beautiful creation with great details. All the elements work so well together. Thank you for sharing your wonderful project with us at Fab'n'Funky challenge Neva

Wow this is great! Love that BBQ.

Thanks for playing along at Aud Sentiments,

Fabulous creation, the black and silver looks really great and I love the BBQ inside.
Thank you for joining our 'Old Favorites' challenge this week at Allsorts.

Hi Donna, an AMAZING creation, love the colours and the very cleverly made mini barbie, I bet Chris loved his unique, one of a kind card! Have a wonderful week... Megan

This is gorgeous with the smart monochrome colours, many thanks for joining us at Allsorts challenge this week.

Stunning make, thank you for joining in at Paper Creator this month.

Wow! what a smashing card love the BBQ in the box
Ginny x
My Blog As I do Rodos

This is fantastic. Such great detail. Very clever. Thank you for sharing at Crafty Hazelnut's Patterned Paper. Rebecca x

What a fabulous card donna - I love it! - thank you for playing along with fab'n'Funky this week hugs Judith x

Oh wow awesome make! Thanks for joining in with our challenge at AYLI Challenge,
hugs Samantha :0)

Wow, this is fabulous! Love that bbq grill! Thanks for sharing it at 4 Crafty Chicks last week!

Oh my goodness, what a cute cute design! So loving this!!
Thanks so much for joining us this week at Allsorts challenge, sharing some old favorites!

WooW, wath for a beautiful box
Thanks for sharing with us at Creatalicious, we hope you will join us again soon.
Hugs DT Manuela

What a fabulous card - love it. Thanks for joining our Polkadoodles Paper Crafting Challenge, hugs, Carol DT

Thank you for joining us this week over at Polkadoodles xx

What an amazing card - love how you made the BBQ as well. Thank you so much for joining in the Polkadoodles Anything Goes Challenge this time. Hope to see you again.

This is SO SUPER COOL!!!! Love it.
Thanks so much for sharing your creation with us over at the Crafty Creations Challenges Blog.
Kristina DT

This is totally amazing. Thank you for joining us at Creative Fingers Challenge Blog.-Samantha(DT)

What an amazing card and tiny BBQ. Well deserving of the playground pick.

Oh this is such a fun design, just love it! Fabulous :o) Hugs, Lisa x

WOW..this amazing Donna. The box is gorgeous but that barbie is beyond fabulous. What a wonderful keepsake. You are so talented. xx