Firstly I hope you had a lovely Christmas, we did and as all the "duty" things are now out of the way I can relax a bit - may even have time to use some of the new goodies I got from the man in the red suit :-)
I have a "Twofer" today; for those non-Australians that is "Two for the Price of One"... both are really simple cards and I didn't think they (one in particular) merited their own post so, "Twofer" it is!!
Firstly I have one I made for Christmas this year; I bought a laser printer recently (and had a laminator) to get into the foil embossing "thang" that's going around, and BOY have I got into it :-)  This is the one of 19 I made using the technique somewhere on it this year! 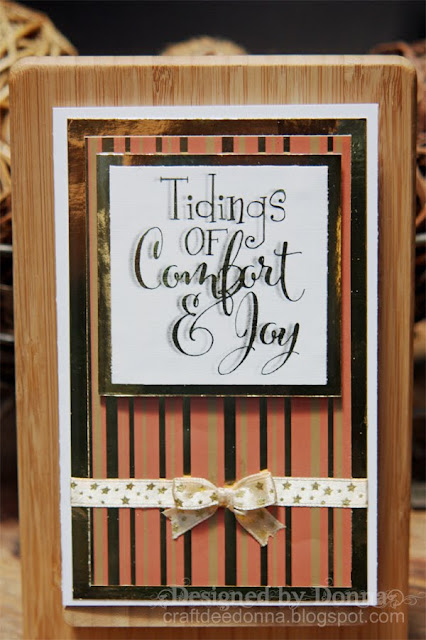 Of course, I have now discovered that foiling is even harder to capture in a photo than glitter! 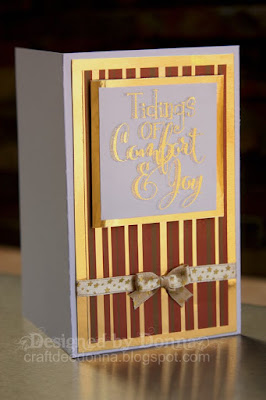 I used background paper that has foil strips on it; it was originally a 12" piece bought years ago.. I've slowly whittled it down and now have a very small snippet left, off this snippet, so I'm entering Pixies Snippets Playground challenge to use Snippets
I have a few pics here, not to show details; just to try and capture the shiny goodness of this foil 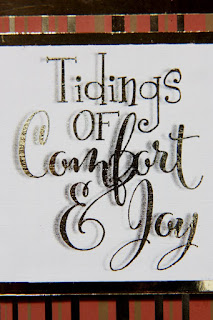 The sentiment is a freebie I got from the generous Paulette at Create with TLC, I added a shadow using Word - sometimes that just adds a shadow around the "outside" of the whole image, sometimes (like in this case) it adds it to each word.  Printed it using my laser printer then obviously then ran it through the laminator with Gold Deco Foil.  Ribbon from stash. 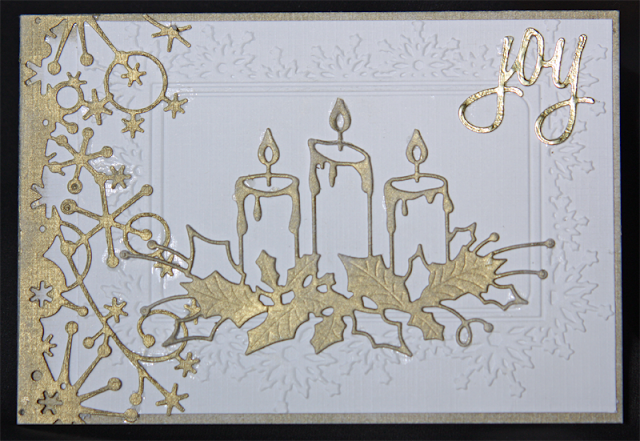 The second card is one I made for Christmas 2015 (I didn't make any last year) and was a bit embarrassed to "blog", it's so straightforward - I would like to say the biggest problem with this card was the photography - it looks so much better in real life.  I used Versa Linen card, edged with Gold ink.
I can't remember the source of the embossing folder, could be Sizzix, the snowflake border is a die from Memory box, as is the Candles (named, unsurprisingly "Memory Box Candles"), I inked those up after cutting too.  "Joy" is either a Sizzix or Memory Box die, I think Sizzix, cut from gold card 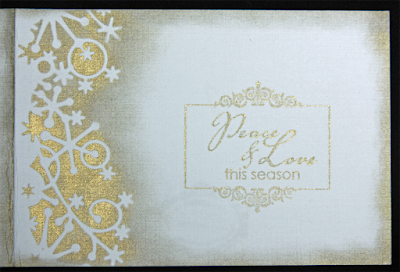 The sentiment on the inside is from the now-defunct Tickled Pink Stamps, the frame is from the same set: I love this stamp set, use it soooo much :-)
So that's it!  I am entering one or other of these cards in the following challenges, you pick which one :-)) Well, Cutie Pie Challenge  has "Stars and/or Snowflakes" as their theme, so that would be the second card with the embossing folder snowflakes (as well as the snowflake border) and Pile It On has "Non-Traditional Christmas Colours" as their theme so the first one with it's pink/peach/coral colour is the one for there... with the same card being for Crafty Hazelnut's Patterned Paper Challenge (as it's the only one using patterned paper!),but all these other challenges apply to either card:
Sweet Stampin' Last Minute/ CAS Christmas

Paper Creator Crafts, My Time to Craft, Sweet Stampin' Christmas, Winter Wonderland, Crafty Hazelnut's Christmas Extra Challenge, Crafty Hazelnut's Christmas Challenge, 12 Months of Christmas All have "Christmas" challenges and
Tuesday Throwdown, Simon Says Challenge, Cute As A Button, Little Miss Muffet, Through the Craftroom Door, Crafty  Creations, Crafting With Friends  Challenge #57, Li'l Patch of Crafty Friends, Polkadoodles, Create and Inspire, Creatalicious Challenges, Simply Papercrafts, Crafting With Attitude and Corrosive Challenge All have "Anything Goes" themes
So that's all for today, I am going to go and get dressed now... it's 2pm and I'm still in my PJs, as is hubby; which is something we NEVER do, in fact I think this is a first - really enjoyed it tbh :-)  We have to go out in a while, we're having a few friends over to bring in the New Year and really should get the ingredients together for the promised "Pizza night".  The weather is great, not too hot but warm enough for a midnight swim if you feel like it (though as we've got older we all are less prepared to mess up our hair/makeup than we were when we were younger, lol.  One couple that are coming we've known for 25 years, we don't care with them and they us, lol, but some of the others haven't seen us at our "glorious best", so we may not want to dispel the myth, haha.
If I don't get back, enjoy your New Year Celebrations and I'll see you in 2018.  Until then, Happy Crafting, Donna
Posted by Craftdee at Saturday, December 30, 2017 18 comments:

Well, another month has gone since I last posted, who knows where the time goes?
This is a card I made for my Aunty in Wales; we live in Australia and the sun is blazing at Christmas time, so I usually try NOT to use "traditional" Christmas images on cards I'm sending to the UK... coals to Newcastle and all that :-) 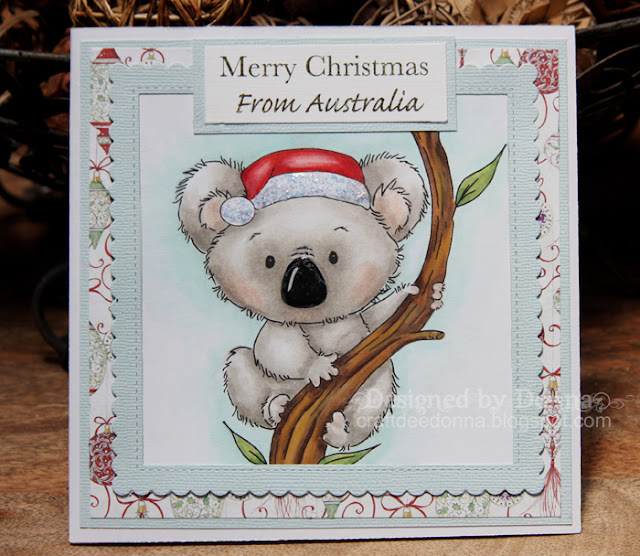 The truth is I've been suffering from depression for a while - it's a longstanding struggle and Mum's death and Dad's demise has knocked me.  I'm finding it hard to get enjoyment out of Blogging, anything really, even crafting - luckily this little chap "found" me and I really enjoyed making this card... leaving plenty of offerings in my Drafts Folder, some actually worth Blogging, lol.
He is a digi stamp called, unsurprisingly, "Digistamp Koala from Lili of the Valley but he came sans hat; I added a digi hat - I DO love digis, so versatile... do you want to know HOW glad I am LOTV started doing digis?? Well, VERY :-)) He is one of their "bears" - even though koalas are NOT bears, and of course while I was there I HAD to buy the entire gorgeous Alpha Bears and NumBears collections, it seemed rude not to :-)
I coloured with Copics and Prismacolor pencils, adding Stickles to the fur trim and Glossy Accents to his nose.  Koalas don't actually have glossy noses, so a bit of poetic license, lol, and they are not native to my state of Western Australia so MORE poetic license... still I did say "From Australia" not "From Western Australia" :-)
The latest "thing" in my life is foil embossing.  I bought a laser printer and already had a laminator so I've been "foiling" like a mad thing.  I generated the sentiment in Word then foiled it in gold.... I have discovered that foil is as hard as sparkle to capture in a pic! Doesn't show at all in this one, sigh. Looks good IRL... yeah, I know they all say that! 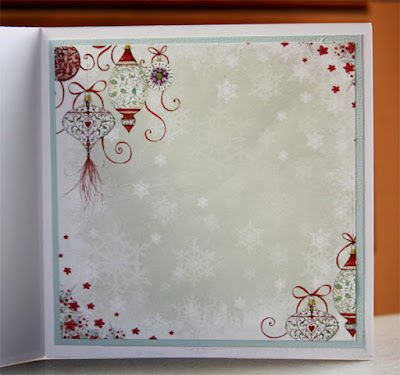 The frame is cut with a Paper Roses Stitched Frames die, they cut beautifully, btw, using American Craft card - I must say this cuts SO much cleaner than the Kaisercraft card I usually use.  I kept the whole thing pretty flat for posting Air Mail. The background paper is from Wild Rose Studio, it's lovely, but it is paper, not card, so a sharp blade is a must for a clean finish.  The piece on the front actually had a square cut out of the middle that I used on another card, as did the outer mat. - love getting double duty out of supplies - AND it kept the weight down for mailing :-) I used another sheet from the Annabelle's Christmas pack for the inside.
That's it.  I am doing "Christmas" stuff today.... hubby has had to go to work, yup, on a Sunday (he is definitely too old for this cr@p, lol) so I am making hay as it were
I am entering my card in the following challenges... one thing for sure there's an embarrassment of riches at this time of year when you make a Christmas card, lol
Hiding in- my Craft Room Use a Digital Image 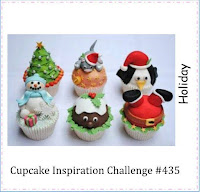 Tuesday Throwdown Is either Christmas or Anything Goes… they didn't say
Pixies Snippets Playground Use snippets - the blue card.. And the paper on the front
Cupcake Inspirations These gorgeous cupcakes with a "Holiday" theme

I will be back before Christmas, this is my goal, and I'll probably Blog multiple cards as I HAVE "mass produced" to a certain extent and I'm embarrassed to dedicate a whole post to each foiled card.  I can slip in some of the less than stellar offerings from my Drafts while I'm at it, teehee.
Until next time, Happy Crafting, Donna
Posted by Craftdee at Sunday, December 17, 2017 37 comments: