My Favourite Type of Challenge

I have NO idea where the last two weeks went... but went they did!! Though there is more on that later.  Soooo it's time for the d Coloured Image", like I said colouring is my favourite part of cardmaking..latest challenge at Di's Digis Challenge Blog.  The theme this time is "Use a Han. so this is my favourite type of challenge. :-)  I thought I'd stick with favourite things and make an easel card... and of course I so love Di's images - what a feast of favourites!! 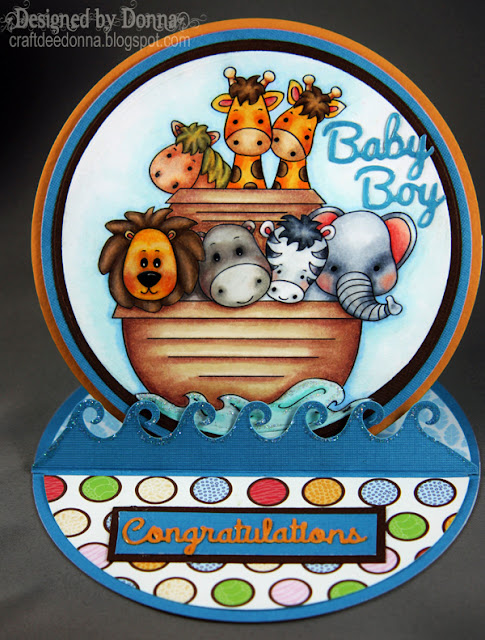 I've had a run on baby cards recently... my sons are at that age where their friends are extending their families. I had a few "girl" cards, I've got less now, lol, and very few "boy" cards so that's what I went with. 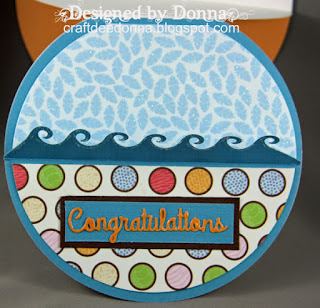 The image is one of Di's new ones, Animal Ark... available here.  I coloured with Copics, adding detail with Prismacolor pencils.
I cut all the circles with my Lifestyle Crafts nesting dies, I love this set; 21 nesting dies gives a lot of matting options :-)  The matting is Bazzil and Kaisercraft, the patterned card came from DCWV Animal Crackers 8" pad... which looks like is retired now, shame.  I cut the waves with Memory Box Wave Edger Border Die, adding some more of the Ice Stickles to the edge for a bit of bling.

The Baby and Boy are Cottage Cutz dies and the Congratulations is Sizzix, I think!  I added a layer of Ranger Glossy Accents to all the die cuts, which gives a nice 3D effect.
There are no embellishments on this card, at all, none!  With that in mind, and the fact that it's predominantly brown and blue I'm entering the challenge at Without Words... and the CAS challenge at 4 Crafty Chicks .  In addition I'm entering the following challenges:

Moving Along With The Times: Baby Baby
Send a Smile for Kids: Bright Colours for Kids
Cute Card Thursday, Pile It On, Crafty Cardmakers: Water
Sparkles Monthly Challenge: Sun Sea and Sand (well I have "Sea", lol)
Inky Chicks My Furry Friend (or friends in this case!)
The Paper Shelter Use Some Circles (Oh yeah!)
Papertake Weekly, Simon Says Challenge Not Square
Creatalicious Challenges More Than One Fold
As You Like It Favourite Single Colour and Why (Brown, it was the "guys" colour at my wedding 38 years ago... with apricot for the bridesmaids, the height of fashion.... then, and I always associate it with that happy time)
Catch The Bug Bingo Board (Circle on card/Border/3 Layers)
Craft Your Passion, Card Mania Challenges, Little Miss Muffet, Art by Miran, Aud Sentiments and Through the Craftroom Door Anything Goes 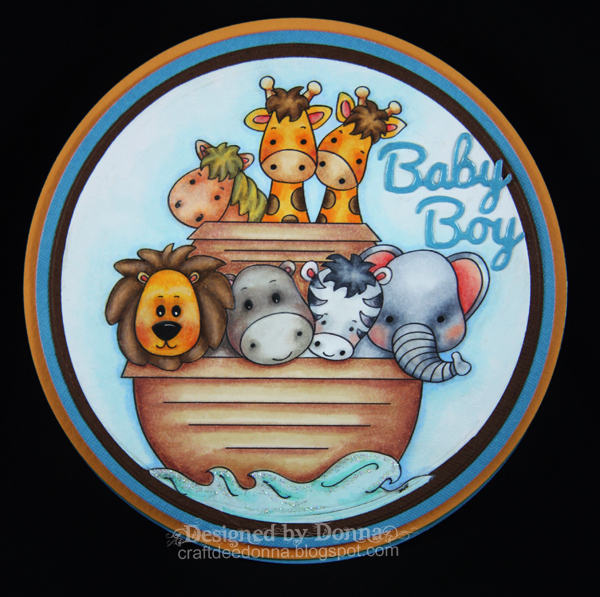 That's it for today's card.  Pop over to the Challenge Blog and check out the team's Hand Colouring, awesome!  Hope you get to enter the challenge this time around, great prize as always... and don't forget there's extra opportunities if you use one of Di's images; and with cuties like this, why wouldn't you??
I hope to be back very soon with another card from my drafts; to be honest when I said I didn't know where the two weeks had gone - not quite true!  I have had a chest infection, being asthmatic it sorta happens most winters sadly, this one's been a doozy, and mainly we've been looking after the twins a lot as their parents have their own set of woes:
They have had to move out of their house as the plaster on ALL the internal walls failed and has been removed and replaced... meaning the carpets had to come up, bathroom tiles replaced, built in cupboards replaced, everything repainted ... on and on - HUGE job that has been a nightmare to deal with as the builder is very disorganized.
They've been out of their house living in short stay accommodation (with two year old twins and a business usually run from home and not transferable to rental accommodation, so my son has had to go "home" everyday to pick up and drop off machinery, had to find somewhere else to store his truck, go there everyday for that.... blah blah)  My DIL has been locked in combat with the builder, suppliers and trades.  She used to work for this (very well known builder) and has resigned as she's found the whole thing so distasteful... it took three years to get them to admit liability, and THEN the woes really began!
It has been a debacle, they haven't had to pay for much (the builder has paid as it's a warranty job, the house was only 3 years old when the problems began) but the upheaval has been extraordinary.  They should get to move back in next weekend, which will be fifteen weeks since they moved out, despite an"absolute guaranteed nine week turn around"  They are both sick, I think it's stress related, both the kids have been sick which is "being two" related, lol, so we've been trying to share the wear with them and we've had their dog (who's lovely, but I don't want TWO dogs) Suffice to say we're all ready for some "back to normal".
In addition my PC reached the end of it's useful life so I thought I'd "upgrade" to a Mac.  Our good friend Dave is an IT professional, has just completed his Masters and sold me his super duper upspecced Mac with ginarormous Thunderbolt display... I had it 13 days and fried the hard drive... with all my newly updated data on it, without backup of most.  Spent this afternoon installing new hard drive and reinstalling software (well Dave did) ... looks like next week is data restoration time, which will be me NOT Dave, lol, more dents in my craft time, spewing!!
Phew, feel better now I've got some of that off my chest
I will be back, with craft related not my-sorry-life-related stuff soon.  Until then, Happy Crafting, Donna
Posted by Craftdee at Sunday, July 19, 2015 28 comments:

Some Mice will Celebrate ANYTHING!!

It's that time of the fortnight again at Di's Digis Challenge Blog... time for a new Challenge.  The theme this time around is Any Celebration; now how's that for easy?!  I've gone with another of Di's cute Mice images, what can I say? I just can't get enough of these little guys!  This is Tipsy Topsy Mice, available here.  Once again I've gone for a "fancy fold", I like trying new things - this is a Pop up Book Card. 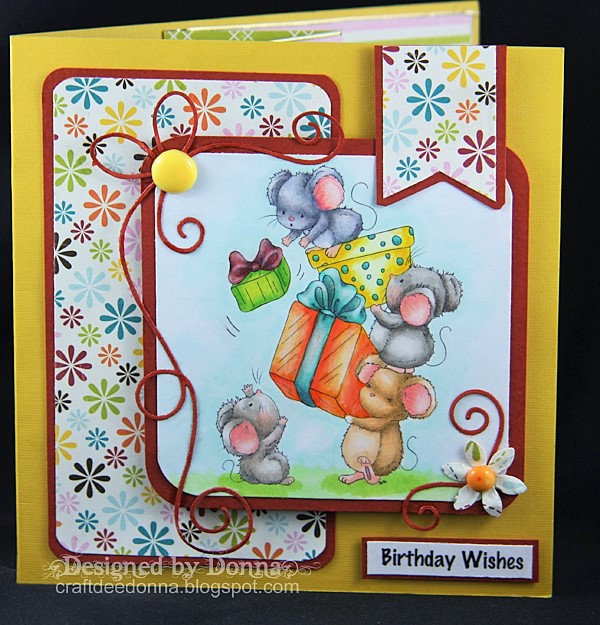 Here's a great tutorial from Splitcoast Stampers if you want to try yourself - it WAS fun :-))  I adjusted the measurements to metric... I can't be doing with all that 7/8" stuff... I'll have the (simpler!) metric version on my Templates and Freebies page soon.  That said, it's "Tax Time" here, I'm a bookkeeper and I've changed from PC to Mac... TODAY, so I wouldn't hold your breath on the template, lol.  It's easy enough to adjust anyway.  I coloured the image with Copics and Prismacolor pencils, as usual. 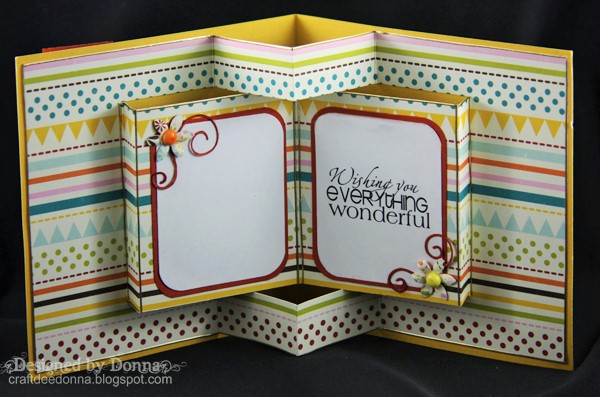 It's the inside of this card that makes it that bit different, I really like it... and (once I nailed the template, lol) it was easy to make.  The card base is Kaisercraft, the patterned papers are from Echo Park's Walk in the Park collection.  The sentiment on the front is computer generated, the one on the inside is from Create With TLC (as are so many of the more interesting sentiments in my collection!), the swirly die cut is a Memory Box Corner Bow (the little bits are one of those cut up), the flowers were cut from scraps of the Echo Park paper with a Fiskars punch and the centres and DIY "enamel look" dots are from my huge collection of melted pony beads... love those things.

One of the really good things about this fold is that the card (provided you don't over embellish it outside OR in) folds really quite flat; perfect for posting.  You can see it's well on it's way to "flat" in the pic :-)
I added some gold sticker strips (peel offs) to define some of the edges on the inside of the card, but I did keep the embellies to a minimum, I left one of the panels blank to jot your greeting on... couldn't decide which one to put the sentiment on and which one to leave blank... still don't know if it's the "right" way around, but one thing for sure, it's stayin' that way, lol. 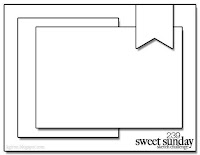 I used the sketch from the Digi Sketch Challenge ... one of my favourite sketch challenges, sadly this is the last one so I thought I'd make the effort and use it - no effort really, it's a good sketch :-)  I can't find the image of the sketch on the blog... but it WAS there - I saved it to my challenge folder... here it is (says Sweet Sunday on it, I'll have to go and check out the sketches... I love a good sketch, such a great starting point for a card)
In addition to the Digi Sketch challenge I'll be entering the following challenges:

Fab'n'funky Challenges Birthdays
The Crazy Challenge Spots and/or Stripes
Clear It Out  Theme: Your Style Stash: Your Favourite Craft item - Digi images, bright paper… and "those" melted pony bead "enamel" dots :-))
Cuttlebug Mania Use a sentiment
Crafty Cardmakers  Sentiment
Aud Sentiments Animals and a Sentiment
Send a Smile for Kids Animals for Kids
Inky Chicks My Furry Friend
Bunny Zoes Crafts Furry Friends
Through the Craftroom Door Anything Goes
Art by Miran Anything Goes
Card Mania Challenges Anything Goes
Craft Your Passion Anything Goes
Addicted to  Stamps Bingo (Flowers/Stamped Image/Punches and Dies)
Of course if I wasn't on the DT I'd be entering Crafty Hazelnut's Patterned Paper Challenge too... there's more than enough Patterned Paper on this little number... I'm going to share it there anyway... it's not always about the prize :-))
Talking of which, I hope you get a chance to enter this challenge... check out the rest of the team's work, fab or what?!  Don't forget if you use one of Di's cute images you have extra opportunities to win, BONUS!!
I'll be back soon, still got loads in my drafts, and once I started cleaning up the hard drive on my PC I found some reasonable pics of some of my other crafts too.. so I might as well share them.
Until next time, Happy Crafting, Donna
Posted by Craftdee at Saturday, July 04, 2015 18 comments: