I thought I'd post a "current" card today instead of one from my Draft Folder... it was our - hubby and my - 40th or "Ruby" Anniversary on 18th February, I wasn't going to "do" a post on it but as I have made a card I thought... why not? especially as I enjoyed Debby's post about HER Ruby anniversary - and I enjoyed the "blast from the past" that the photos in her post brought so I've added some of ours in the hope you'll get a chuckle out of them... at how insanely YOUNG we look if nothing else, lol.  Here's the card 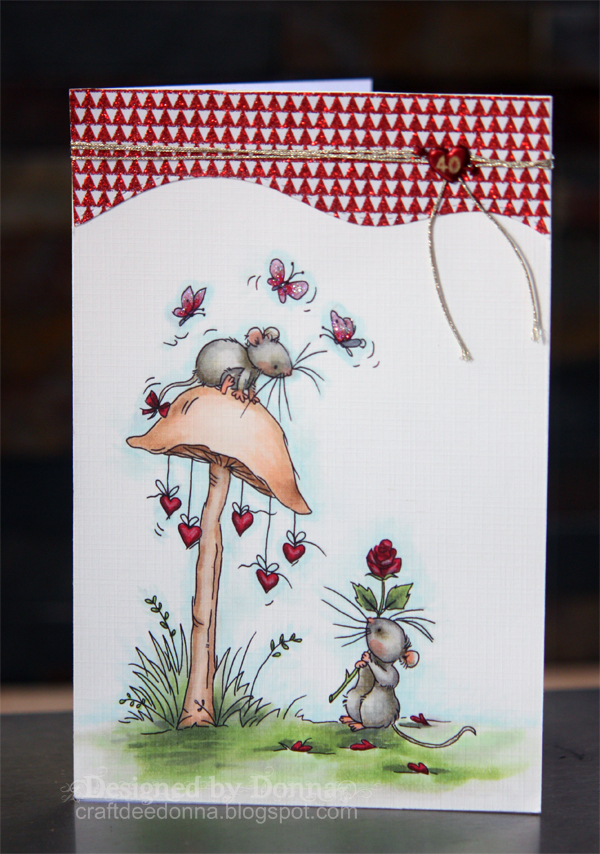 The image is from Lili of the Valley, it is a digistamp and I can't tell you how stoked I am that they are doing their fabulous images as digis... I've been drooling over them for years waiting and hoping that they'd come out as digis; I have to say I've gone a little bit mad in the Paypal department since they have, lol.  This one is called  "Hearts and Flowers" - you can see how I HAD to have it can't you??  I coloured, as usual, with Copic markers adding some shadow and highlights with Prismacolor pencils. 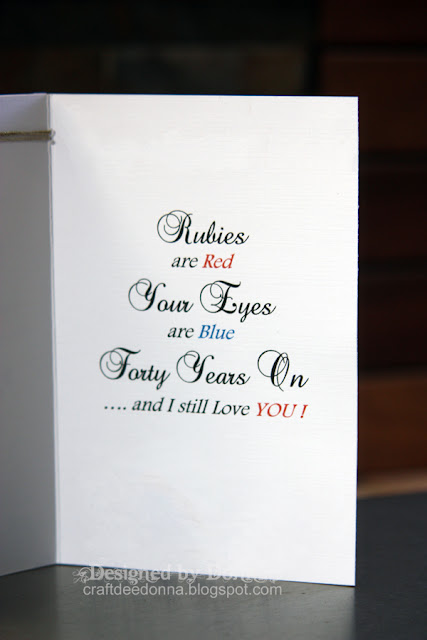 I used paper from DCWV's "Glitter Basics" stack, it's fabulous... this actually is a snippet - it wasn't a snippet until I butchered it over and over trying to cut the wavy edge, (Lawn Fawn Stitched Borders die, I think) with the "stitches" on the right side - you know how it goes when you over think something.  I added a burgundy red heart brad that I wrote "40" on in gold gel pen, that with some fine gold twine finished the front of the card.  Incidentally "Ruby Red"... isn't, I mean turns out Rubies AREN'T that red; hubby bought me a gorgeous natural (as opposed to "created") ruby and diamond bracelet for the occassion, and the rubies are quite pink, not "Ruby Red" at all!  Who knew?, well not ME, lol
On the inside of the card I added a sentiment that I made up using Word... the blue-eyes part is a bit of an "in joke" and no, I'm NOT sharing, lol, and that was that
I'm going to enter the card in the following challenges: 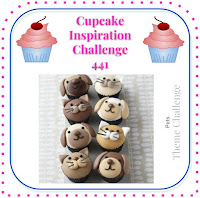 Cupcake Inspirations has these cupcakes and the theme "Pets"... these meeces look tame enough to me to qualify :-)
Cuttlebug Mania Ribbon and Bows - hope the bow in the twine is enough
Pixies Snippets Playground Snippets - yeah, like I DON'T have enough snippets already, I made some specially, lol
Crafty Hazelnut's Patterned Paper Challenge Use Patterned Paper
As You Like It Single or Multiple Layers and Why - I really like multiple Layers, I think they give a  "hand made" look, but I also like the image to shine so am tending to more CAS... so I suppose "CAS with a layer or two" best describes it ;-)
Addicted to  Stamps Have a Heart - hearts on the image, heart brad
The Crazy Challenge Use Red
Cardz 4 Galz Furry Friends
Hanna and Friends Favourite Stamp - new "fave", and it's LOTV, eek!
Aud Sentiments Anything Goes Plus a Sentiment - the sentiment is on the inside
Cute Card Thursday,Catch The Bug, Little Miss Muffet, Through the Craftroom Door, Digi Choosday, Crafty  Creations,  4 Crafty Chicks,  Creative Fingers, Crafting With Friends Challenge 62, Li'l Patch of Crafty Friends, Polkadoodles, A Perfect Time to Craft, Create and Inspire, Creatalicious Challenges, Simply Papercrafts, Crafting With Attitude and Corrosive Challenge
Now for "those" wedding pics 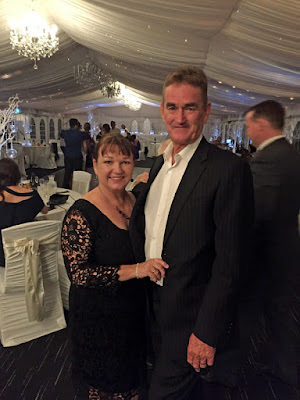 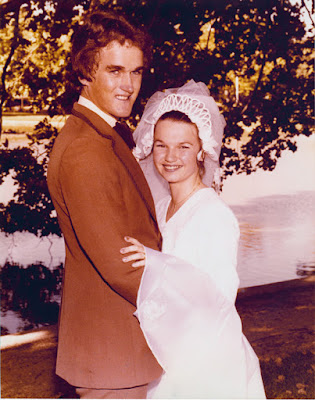 .... well it IS forty years on, give us a break :-))  Oh, and that man to the right behind hubby is our son Matt, ye gods and little fishes where HAS that time gone?!


Until next time, Happy Crafting, Donna xx
Posted by Craftdee at Thursday, March 08, 2018

Wow. Loved seeing this blog post. Great anniversary card and great photos.
Thank you for sharing with us over here at "A Perfect Time To Craft" and best of luck with your entry.

Happy belated Anniversary! I loved the side by side photos! My hubby and I are going on 38 years this November! :) Loved the card, especially the sentiment inside! It's all wonderful! Thanks for sharing it with us at Lil Patch of Crafty Friends!
Sandy DT

That card is so sweet and so is the reason. CONGRATULATIONS!!! Ruby is my birthstone and it is great that you have a wonderful man to buy you some beautiful gems. My parents just celebrated 50 years and are having a reception in April. Sending you hugs from afar. Thanks for joining the Catch the Bug Anything Goes Challenge, Lisa Lynn DT.

Love, love, love your card it's beautiful. Thank you for sharing with us over at Polkadoodles Crafting Challenge. Take care, Ann-Marie x

This is gorgeous Donna, love the cute stamp and cas design as well as all the pretty details, the little heart and sparkle on the butterflies.
Your photos are gorgeous too....lots of happy memories
Lorraine x

What a lovely card Donna - just perfect for your 40th Wedding Anniversary of course. Sweet LOTV image - we can expect a lot more as (for now) they're stopping selling their rubber so it looks like it'll all go digital. Much easier for you of course. And the design of your card really show off the image as well as allowing the use of that wonderful curved die and ruby red paper!

I loved seeing your photos - and I'd say you and your hubby have matured like very fine wine. Still looking fabulous as well!

Beautiful card! Love the shimmery parts and that sweet lovely image! Happy 40th! Thanks for playing with us at 4 Crafty Chicks last week!

A gorgeous card! A lovely design and I loce the lotv image! Adorable. Your fotos look great! Thanks for joining our challenge at Addicted to Stamps. Marlies

Wow this is so sweet, beautiful and adorable...i love it.
Also great and lovely photo's.
Thanks for joining us at Addicted to Stamps.
Greetings, Danoesja

WOW ! Just adore this ! Thank you for joining us in our Catch the Bug Saturday Challenge! Creative regards, Gina

WOW ! Just adore this CAS design! Thank you for joining us in our Catch the Bug Saturday Challenge! Creative regards, Gina

Great post, your card is beautiful but all the post is awesome. Thank you for play with us in Polkadoodles Challenge blog.

I love your card. The mice are so cute. Thanks for sharing over at Aud Sentiments.

Awww what a sweet image and you have colored it beautifully! Great photos too! Thanks so much for joining us at Cardz 4 Galz!
Tammy x

Beautiful card, love the cute image. Thanks for joining us at Through the craftroom door this week.

Beautiful card, gorgeous. Thank you for joining in the fun with us at Digi Choosday Challenge, good luck! Yvonne (DT)

A super card, I love the image and you've coloured it beautifully. I like your before and after pics too. Thank you for joining in at As You Like It x

Great work. Thanks for joining us at Crafty Creations. Anna-Karin DT

Aww such a sweet Anniversary card, its coloured beautifully and so adorable x

This card is so beautiful! Fabulous design! Thanks for sharing with as at The Crazy Challenge.
Iskra DT

What a lovely single layered card and wonderful blog post!! Thank you for sharing with us at AYLI. Sarah DT

A sweet and lovely card. Thanks for joining our challenge at Cupcake Inspiration!
Danijela-DT

Oh, how beautiful!!! What a great card! Thanks for sharing with us on Cardz 4 Galz, Wendy xx

Congratulations on your Weddinganniversary!
40 years wow

The bow is a bit off a doubter but I would like to thank you on joining us at Cuttlebug Mania :)

What a fun post! I really enjoyed reminiscing with you! And what a stunning card that is also incredibly adorable! I love the little mice and the swatch of ruby red at the top! Thanks so much for joining us over at Creatalicious! Sonya DT

A gorgeous CAS anniversary card.
Thank you for sharing with us over here at "A Perfect Time To Craft" and best of luck with your entry.

A wonderful card! Congratulations on your Ruby Anniversary!
Thank you soo much for taking part in our "anything goes with optional girly” challenge over at Creatalicious & good luck in the draw.
Hope to see you again in our new challenge as well…


PS: Sorry for the late comment, life had been very busy these past weeks…