Hello world.  Long time no see :-)  A long boring story involving health, the lack of it and the effect on one's psyche :-)  but I'm back now... just not with a card today, but a birthday cake 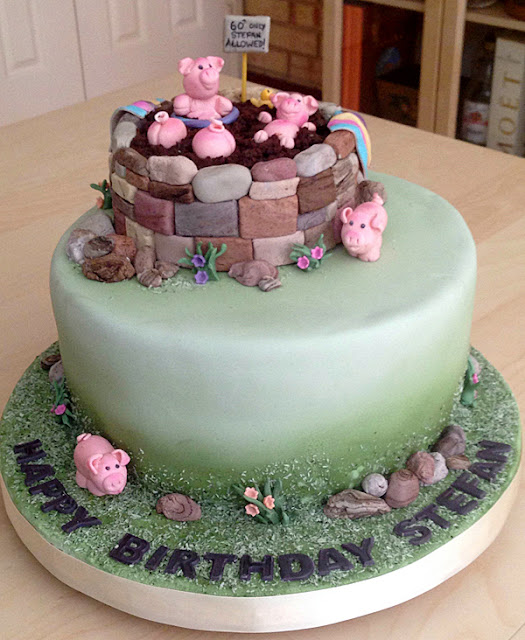 I have made a lot of decorated cakes over the years, many of which I don't have pics of... another long boring story I related on this here Blog years ago, involving misplaced trust and Microsoft OneDrive.  Suffice to say several hundred craft photos disappearing into thin air was NOT the heartbreak it WOULD have been if I hadn't lost six YEARS of family photos in the same heinous event... it's all relative

Anyway.... this one photo of the cake I made for my hubby's 60th birthday DID disappear along with its stablemates, but showed up on an old SD card I found when I was looking for a 'clean' one to donate to my grandson's Nintendo... happy Donna, one is better than none, lol.

Hubby loves pigs... loooooves pigs, so that's what he got.  He also has a saying about being as happy as a pig in mud, so..., you got it :-)  The mud is the chocolate ganache I used as the filling for the cake, the cake covering is fondant, airbrushed with food colour.  I made the pigs with fondant, and the rocks, towels flowers leaves and letters in fondant when I come to think of it, haha.  The sign (fondant!) is on a toothpick and says "60+ only.... Stefan ALLOWED"

I'm entering in the "As You Like It" challenge, which has the theme "Favourite non-card Project and Why".  Cakes are my favourite craft other than cardmaking... and Decorative Painting.  Different emphasise over the years, but cakes have been the longest held passion: I did a course when my eldest was two, he is 40 in February.  They are like comfy shoes in my crafting world :-)  I'm entering A Perfect Time To Craft's challenge too, which says "any" craft... though they probably mean papercraft, and I'm definitely pushing it with Allsorts Challenge who has the theme this time around of "Birthday Cakes/Cupcakes"... I just couldn't resist

Apologies if not appropriate, be gentle with me but feel free to delete my link

On that note, I'll be back soon with a card... my Drafts folder is huuuuge

Until then, Happy Crafting, Donna

A wonderful cake Donna and just so perfect for hubby. Lovely modelling of those pigs and attention to the little things that make it what it is...I hope you enjoyed all the celebration as much as you could and are feeling better.xx

Wow, gorgeous cake. I love the cute pigs. Thank you for joining us at As You Like It. xx Wilma

A really super cake, love the wall and the little pigs. Thank you for joining our 'Birthday Cake or Cupcakes' challenge at Allsorts.

Gorgeous cake!
Thank you so much for sharing at Allsorts, welcome again;-))m

Donna this looks amazing and thanks for entering the Allsorts challenge, xxxx

Super sugar craft, many thanks for joining us at Allsorts challenge this week.