The card I have today was a commission... well, one of the ladies I meet up with at the park when I walk the dog asked if I could make a card for her friend Vicki's 60th birthday, so "commission" sounds a bit posh :-)  There were quite a few "elements" of Vicki's life my friend wanted to be incorporated, a scene seemed the most appropriate form... picture heavy LOOOOONG post, sorry;-) 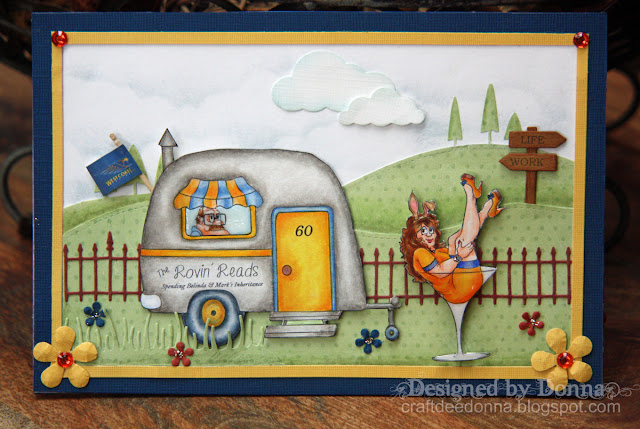 The birthday girl is "not a twig" :-) has bought a campervan to use in her retirement with her hubby, their name is "Read" their kids names are Belinda and Mark - she loves a cocktail (or three, lol) and is a FANATICAL supporter of  "our" Footy team The West Coast Eagles...  whose colours are Blue and Gold. The card was for her friends to sign so it had to have plenty of room for signatures - PHEW, that's a lot of details to squash into one li'l ol' card, lol. It's an easel card, I just love easel cards :-) 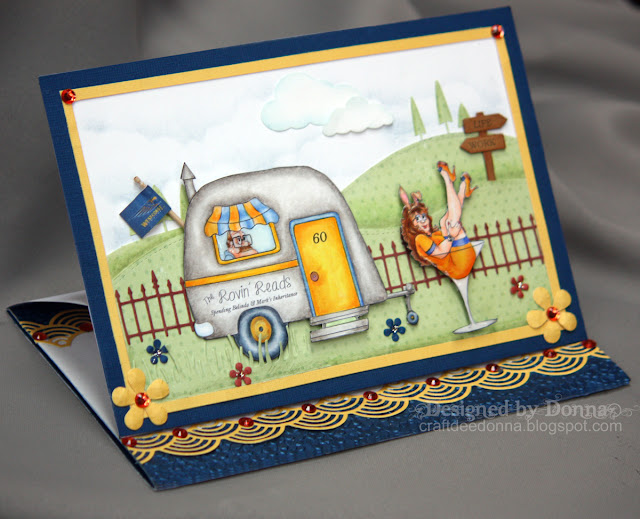 There are several images used here; the caravan is the same one I used for my son's birthday card in 2016, which is when this card was made, it's from (the sadly now defunct) The Stamp Fairy and called "Lenny Camping". 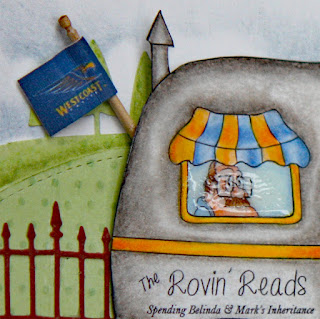 I erased Lenny from the front of the van and drew in a drawbar and jockey wheel, as well as adding the spending-kids-inheritance logo on the side of the van and giving the door the appropriate number, one of the reasons I love digis, so easy to mask off and add personalisation :-) I fussy cut the caravan and popped it up on foam dots.
Another little "feature" is the West Coast Eagles flag flying proudly on the back of the caravan.  I downloaded a pic from the WCE Homepage, shrank it down to as small as I could still having it recognisable, wrapped it around a toothpick and glued it in behind the van - of course, it looks so much better IRL 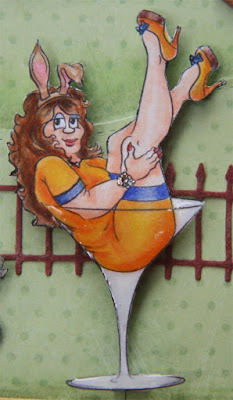 "Vicki", seen here in her cocktail glass is, in fact, Martini Bianca from Dr Digi's House of Stamps... I DID slim her down a little - and fussy cut her & popped her up on foam dots too.  I've added her hubby to the window of the van, he is also from Dr Digi's (Weekend Walter), I've used him for one of my Hubby's cards - bonus here is... he actually looks like Vicki's husband!
I coloured the images with Copics, adding Glossy Accents to the glass and the window of the van.  The grassy hills were cut with Lawn Fawn Stitched Hillsides using some green spotty paper from my stash, I added some shadows to accentuate the layers.
The "hill" with the pine trees is Poppy Dies Freemont Pine Landscape, the Grassy Border, signpost with "Work" and "Life" on and Picket Fence are all My Favorite Things dies,  the clouds (popped up on foam dots) are Memory Box and the flowers are punches - with gems as centres on the larger and Stickles as centres on the smaller 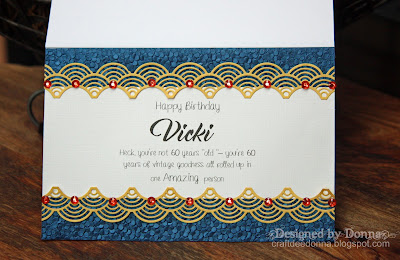 I love the arched border... it's MFT as well, "Fanfare Scalloped Border".  I added it in yellow on the blue card (which has a lovely texture called Pebble, and a pearl finish that shifts blue to black that I can't do justice to in photos) that I added the computer generated sentiment panel to... and in blue - though plain blue as the Pebble paper looks nice, but cuts like a dog! - on the jotting panel 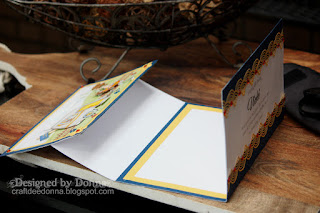 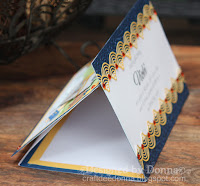 As the jotting panel was going to get a lot of signatures it had to be BIG, so I added an "extra" fold and tada... there we have an A4 panel for all to sign - hopefully the pics show what I (obviously!) am having difficulty describing :-)

I added some gems to the Fanfare border on the sentiment panel but left them plain inside so the card stayed pretty flat.
And that, finally, is that!!  I actually REALLY enjoyed creating this card, and the recipient LOVED it, so that was very satisfying too :-)
I'd like to share it in the following challenges:

Tuesday Throwdown Add Some Texture, The Paper Shelter Use a Sentiment, Crafty Hazelnut's Patterned Paper Challenge Use Patterned Paper, Pixies Snippets Playground Use snippets (the green paper), Die Cut Divas Use Yellow, Little Miss Muffet, Through the Craftroom Door, Digi Choosday, Crafty  Creations, 4 Crafty Chicks, Crafting With Friends Challenge 73, Creative Fingers,Li'l Patch of Crafty Friends, Polkadoodles A Perfect Time to Craft, Create and Inspire, Creatalicious Challenges, Crafting With Attitude and Corrosive Challenge Anything Goes
Well, that's it for today... this card was one I found on an a camera card.. I'm still trying to resurrect my laptop from the Great OneDrive Fiasco.  I am "getting there", I've found 47 cards from my Drafts- I know I had 52 or 53, so I haven't lost TOO many.  Can't say the same for all my photos sadly, but I am still looking, loading, sorting and labelling so it's not over yet
Until next time, Happy Crafting, Donna
Posted by Craftdee at Friday, September 21, 2018

Wow Donna what a lot of time and effort you put into this fantastic creation... all the detail...and well worth it all. I expect this will be a treasured keepsake.

Such a fun card and I love that all the elements to it have a meaning. Thank you for sharing your beautiful make with us over at Polkadoodles Crafting Challenge and hope you will join us again.

What a very special card Donna. I love how you incorporated all the recipients favourites. Very clever and beautifully coloured and designed. hugs, xx

Wow Donna - this really is fabulous! So much personalisation and the detail is amazing! A real 'one'off' for sure. I love it!

Love the scene Thank you for sharing with us over here at "A Perfect Time To Craft" and best of luck with your entry.

A great and joyful card. I love the colors and design of the card.
Thank you for joining our challenge in Crafting With An Attitude.
BożenA DT CWAA

Oh! What a fun card, love the design and the coloring of the images. Thank you for joining us at Die Cut Divas :)

Hi Donna, a super card and congratulations on getting so many personalised elements on one card, love the WCE flag blowing off the back of the caravan... have a wonderful week... Megan

Such a fun card! We just returned from a week long camping trip so this card made me smile! Thanks for playing at Crafty Creations this challenge and hope to see you again soon! Donna - DT Member

Faith A at Daffodil Cards said...

WOW! I LOVE how you have put so many images together to make such a SUPER DUPER scene, GREAT work. Thank you so much for joining us in our ATG challenge at Through The Craft Room Door this week. Looking forward to see you again next challenge.

Through The Craft Room Door
ttcrd.blogspot.com

Very cute Donna, such a fun image and sentiment, great card! I hope you are doing well my friend. Thanks so much for playing at The Paper Shelter Challenge "Add A Sentiment" this week. Hope to see you again next challenge. Hugs:) Audrey DT

A fabulous card!
Thank you soo much for taking part in our "anything goes with circles” challenge over at Creatalicious & good luck in the draw.
Hope to see you again in our new challenge as well…

Wonderful creation. Thank you very much for joining our challenge at Crafthazelnut's Patterned Paper challenges. Hope to see you next time.
Hugs, Iwona

I love the bright yellow in the door. It looks like the door is brightly shining with reflected light. I love the scene. So glad you joined us at Die Cut Divas.

Thank you for joining us at Lil Patch of Crafty Friends.. good luck in the prize draw.. Megan DT LPoCF

Popping over from Pixie's Playground because Di said we had to learn about all of the wonderful details in your card. And I'm glad I stopped by. What a wonderful creative heart you possess. Thanks for sharing and I'm sure it got lots of ooohs and ahhhs from all who saw it [especially the birthday girl.] I was thrilled that one of my cards was also a top pick. It didn't take near the work as yours, but stop on by my blog if you want to see it in all its glory. https://myasperations.blogspot.com/