Well do you like my Post title??  Corny huh? :-)  The new challenge starting today at Di's Digis has the theme.... can you guess?.... Snow or Snowflake(s). I have used the opportunity to make a TRULY early start on my 2016 Christmas cards!  This one has an acetate front; the one thing that's even harder to capture in a photograph than glitter is acetate... so it is a picture-heavy post - and loooooooong ... warned ya!! 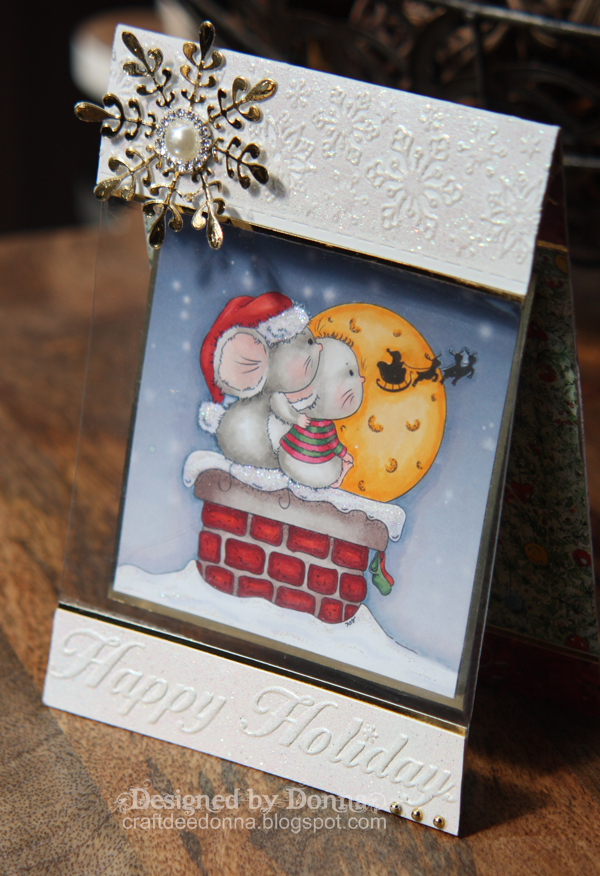 It looks like the image (the cuter than cute The Magic of Christmas available here)is stuck to the inside of the acetate but it's not; I wanted it to "hang" from the inside of the card rather than be back on an angle, as it would be if stuck to the "inside" of the card, so I worked out a system.  I'm sure it's not original, but I haven't seen this exact way of doing it before so I'm claiming it, lol. 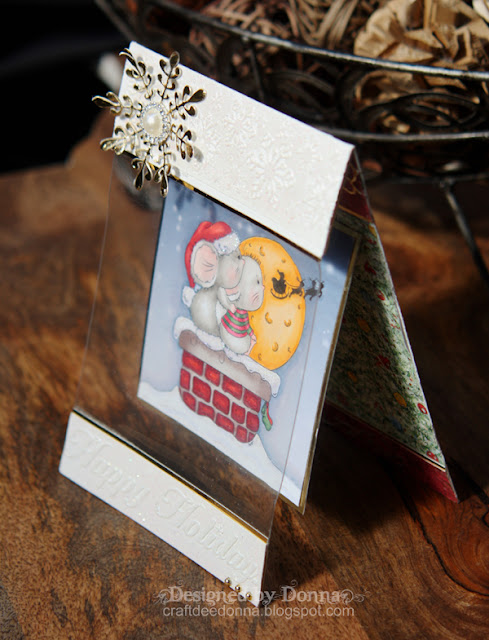 Well to be honest "system" is putting it a bit strongly, all I did was fold a small tab of the (very thick) acetate I used on the front of the card and stick it behind the image; when you push the card closed it flattens the tab down and the card is perfect for posting, when you pull the tab so it's 90 degrees to the back panel it holds the image panel out from the back panel meaning it's easier to see with the card standing "open".... I think you've probably worked out from all that "verbage" why there's a lot of pics, them speaking a thousand words and all -))
Here's the  "apparatus"... alias "bit of acetate", lol, and how the card looks when ready for posting as well as what it looks like when it first comes out of the envelope! 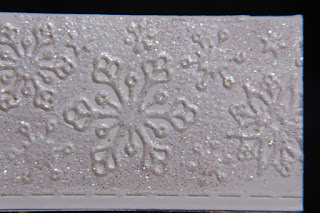 The panels at the top and bottom of the acetate front are embossed with Darice embossing folders... they are two of a set of three in the Seasonal Theme Embossing Folders set... I made sure I used the snowflake one to fit the theme, heat embossed with Ranger Bridal Tinsel EP... I know, it doesn't show in the pic, sigh.  A sliver of gold card adds a touch of elegance, I think :-) Paper Smooches Dots and Dashes dies were used to cut the edges of the embossed panels, it just finished them off somehow. 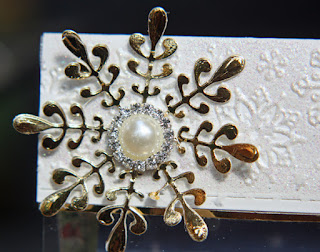 I used a Joycraft Snowflake die to cut a gold snowflake (just to make EXTRA sure I had the theme covered, lol) and added a rhinestone and pearl embellishment from my stash to the centre to finish it off.
The "inside" of the card (which of course you can see most of from the outside) had a strip of paper from the same pack as the background (Wild Rose Studio's Annabelle's Xmas Pack) and a Memory Box Ivy Tendril die cut in gold to add interest, and to tie in the gold mat behind the image. 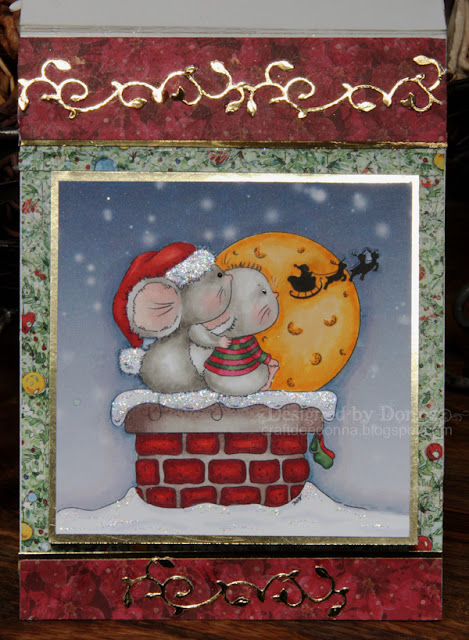 I coloured the image with Copics, and used the snowy sky paper I created before Christmas as a background (it's available in two colours on my freebies page, here, if you're interested) I added some Ice Stickles to the fur trim and snow on the image, it's pleasingly sparkly IRL :-))
I was going to use the back of the image panel as a jotting space, but decided the recipient may never find it!  So I added a panel to the rear of the card for that purpose and stamped a sentiment - my favourite Christmas sentiment, from (the sadly now defunct)  Tickled Pink Stamps - using Memento ink and my stamp-a-ma-jig... I LOVE that thing, it's made the world of difference to how often I'm prepared to use a rubber stamp; 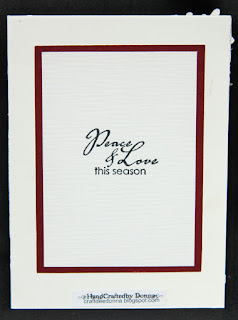 I always botched it before I got this brilliant tool, not anymore :-
That's it for today's card, it's really very simple, just difficult to describe!  I hope you get a chance to pop over to the challenge blog and have a look at all the snowy wonderfulness there... and that you get a chance to enter the challenge too; great prize on offer as always, and if you use one of Di's cute images (digi or a Candibean rubber stamp) there's extra opportunities, WooHoo!!
I am SERIOUSLY going to be back in a few days, I even have the post ready.... well almost, rofl. In the meantime I would like to enter this card in the following challenges:

Despite my post title it WAS something of a challenge for me to "think snow"... in fact I thought I'd share a pic or two of the reason I have posted this a little late: it's been really hot here and as it was still over 30C at 8 pm I was having a bit of R&R and a "quick" dip in the pool that ended up involving a cheeky chardonnay and some particularly nice gorgonzola, yum yum. 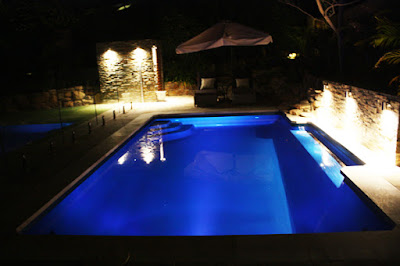 I especially love the pool in the evenings, the frangipanis we've planted have started to bloom and the fragrance in the balmy evenings is really quite gorgeous.  Now we've finally got around to putting the lighting in it's very nice out there at night. Snow wasn't really on my mind, but I DID remember to get this post out, so here it is :-))  Until next time, Happy Crafting, Donna 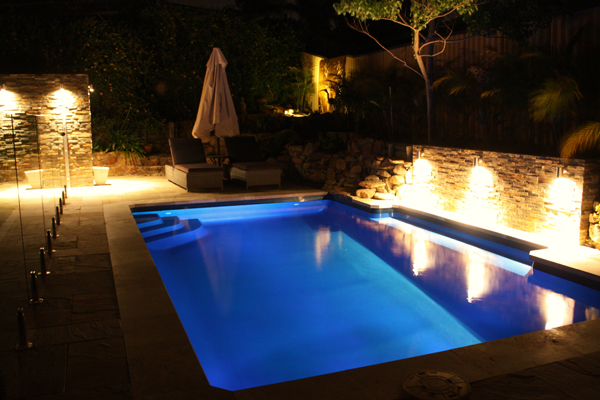 Wonderful card Donna, I love everything about it & well done for starting early with your Christmas cards!
Gorgeous photos too, that pool looks very inviting :o)
Hugs
Tracey
xx

GASP! Awesome card! I just love it! SO well done and so many interesting details! :)
Thanks for sharing it over at the ABC Christmas Challenge blog!

Wonderful & creative card with great attention to details. Thanks for joining us for our 'Anything Goes' challenge #49.
Alicia (Art by Miran DT)
MaxiBelle Studio

Wow, this is amazing!! I love all the details and the cute image! Thank you for joining us at Little Miss Muffet Stamps! :)

So, so cute! I love your technique with the acetate and appreciate the tutorial; I'm inspired to give this a try! I must add, I really enjoy your writing style!! Thanks for sharing with us at TTCRD.
Katrina
ScrappyHorses.blogspot.com

What an amazing Christmas card! You put a lot of work into it, and it's gorgeous. All of the details come together so nicely. So glad you joined us at Pile It On!

P.S. Your pool area is beautiful!

Beautiful card Donna. Love this design...might just have to cas this one and bring out the acetate. Your backyard looks gorgeous and the pool so inviting.,...enjoy! hugs, Pat K xx

That is an amazing creation- you should be so proud! You post is very detailed- thank you for joining us at Crafting With Friends. Also, I am loving your beautiful pool...I also enjoy my pool at night, it is very magical with the lights.
Hugs from Arizona,
Amy

Very, very beautiful card, really striking colours and design.
Thank you for joining us at The Crazy Challenge!
Stefi DT

Fabulous card Donna, there are so many wonderful details on it. Thanks for sharing it with us at ABC Christmas Challenge. Lisa DT

Stunning card, Donna. Gorgeous details. Thank you for joining us at As You Like It. Luv, Wilma

I have to start by saying how jealous I am of you...... Heat and a pool to cool off in....... heaven. :)
On to your card which is totally beautiful. I love the perfectly coloured image and your card design is fabulous. Thanks for joining in with our 'Glitter and Shine' challenge at Winter Wonderland this week, hope you will join us again.
Eileen x

What an ingenious idea! I love what you've done with this card! :)

Thank you for joining us at CraftyHazelnut's Christmas Challenge Extra for January!
Monica - DT

What a gorgeous creation Donna!

A great card!
Thank you soo much for taking part in our "snowflakes” challenge over at Creatalicious & good luck in the draw.
Hope to see you again in our new challenge as well…

(DT Come and Get It)