Happy New Year... and a new Challenge at Crafty Hazelnut's

Happy New Year to you all... Followers and Visitors... I hope 2016 brings all that you wish for.
Being the first of the month... even though it's also a New Year... means a new challenge has started over at Crafty Hazelnut's Patterned Paper Challenge, where the always-easy "theme" is to use Patterned Paper on your creation.  I have a Christmas card to show you as my DT inspiration, but the truth is it is one out of my drafts from last year; no, not 2015... 2014!!  My New Year's Resolution is - you guessed it - to get my projects out of my Draft pile within a month of being made.  We'll see how THAT one goes, though if my bitten nails and unused stash are anything to go by Resolutions aren't worth the mental paper they're written on, lol 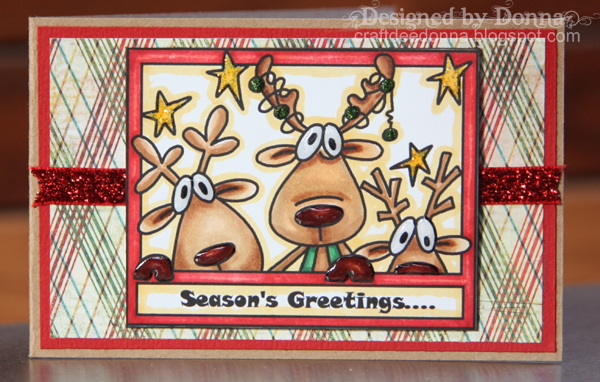 Not only is this a card from my Drafts, it's a Christmas card, which you're all probably heartily sick of by now... and a very basic one at that; oh well, it DOES show off that lovely paper from Basic Grey's Jovial collection nicely.  The image is from Bugaboo; it comes with or without the sentiment - see if you can guess which way I went, lol.  I coloured with Copics and Prismacolor pencils (as usual) and added lashings of Ranger's Glossy Accents (it really is the best!) to the eyes, noses and hooves.  I also added Stickles (Spruce) to the ornaments and stars (Stardust)... it helped tie in the super glittery red ribbon from my stash; super glittery ribbon that liked to share its "super-glitteriness" EVERYWHERE I might add! 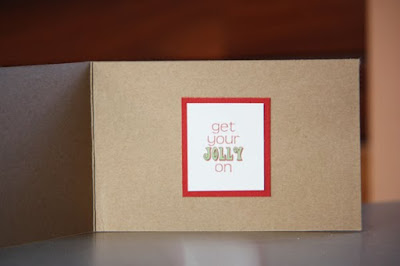 I finished the inside of the card in very simple fashion, always a good idea with Christmas cards when there's so much time pressure... not THIS year though, I'm starting them in January... another New Year Resolution (you can stop laughing now, hehe)
The sentiment is a freebie from the fabulous Paulette at Create With TLC, at least I think it was a freebie, it may have been in one of the sets I purchased, but Paulette does offer a LOT of freebies (she's such a sweetie) so the chances are it WAS a freebie :-)
That's it for my card, embarrassingly simple really.  I'd like to enter it in the following challenges:

A gorgeous card, love those reindeer!
Wishing you and your family a very Happy, healthy and prosperous 2016
Lorraine x

So cute and full of fun. Thank you so much for sharing your lovely creation with us at Sparkles Challenges.
Happy New Year.
Hugs
Cathy DT Member
xxxxxx

What a fun card this is Donna! Really made me smile here - and beautifully made!

You have a great resolution for 2016. I should do the same thing. I have a pile of images colored, card fronts that I've never done anything with. It's time to get them done. I never get sick of Christmas. I make cards all year long and listen to carols in the summer. Your card is adorable. The image is so cute and well colored. Love that sparkly ribbon too. Thanks for joining us at Tuesday Throwdown for this challenge.
Margaret, DT

I love your card Donna. That reindeer trio from Bugaboo is hard to beat for cuteness! The colors of your card are wonderful as well. Thanks for playing along with CHNC Christmas Extra this month!

These reindeer are simply awesome. I love that clean and simply layout. Just wonderful inspiration. Thank you so much for sharing your beautiful creation with us at 4 Crafty Chicks Anything Goes Challenge.

This is such a cute card!! You made me laugh out loud with your comments about resolutions!!!
Thanks for playing along this week at Tuesday Morning Sketches!!
Debbie (TMS DT)
Debbie's Dash of This and That

Love the sentiment inside. made me smile. Thank you for playing along this week at OSAAT. I sure hope to see you back again very soon. Good Luck in the challenge!!!

What a fun card! I love the cute image! Great coloring and the glossy accents on their nose and hooves look great! Thanks for joining us this week at Tuesday Morning Sketches! Looking forward to seeing more of your wonderful creations in 2016!

this made me chuckle. thank you for sharing it with us at TTCRD and good luck, Theresa DT xx.
http://craf-ther.blogspot.co.uk/

Agree with Theresa, this card made me smile. The cutie reindeer are so funny (and beautifully colored). Thanks so much for joining us this fortnight at AYLI Challenge!

Sweet card - love their shiny red noses!
Thanks for playing at Pile It On!
Helen x

This is beautiful, and oh, so cute! Good for you finishing up your draft pile. I have a bits and pieces stash that I plan on using this year. Anyway, very cute. Love your coloring and the glossy accents. Thanks for playing with CHNCC2.

Waw this looks really gorgeous. Thank you for joining us at As You Like It Challenge. Hugs! Mojca

Great card, well done! Thanks for joining us at The Crazy Challenge.

Very nice card! I love the image! Thank you for sharing it with us at The Crazy Challenge!