Well I know you guys in the Northern Hemisphere are "fall"ing into Autumn - I know this because here in the land Down Under we're "Springing" into Spring, lol.  The challenge starting today over at Di's Digis Challenge Blog is to use Autumn or Fall colours - easy for me really, as I love rich earthy colours, ironic in a way as (as well as it NOT being autumn here) we don't get much in the way of an autumn - it jumps pretty swiftly from summer to winter, which is very mild... anyway enough waffling here's my card. 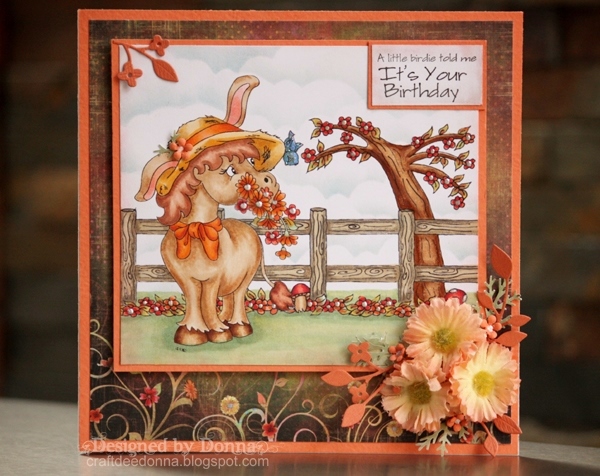 I've actually used two of Di's lovely digis on today's card, the scene is set for Daphne Donkey and her little birdie friend with the Background image Tree and Fence, actually I used the background stamp twice, flipping one copy and cropping the tree out of it; I then put Daphne in front of the "join", all done so easily in Word - and one of the reasons I love digis so much:-)  Gem of a Challenge want us to Use Two Images, so I'm in.
I've coloured the image with Copics, adding the clouds with a home made stencil and Versa ink.  I added Viva Decor Pearl Pen to the centres of the flowers (on the image) and Stickles to the bird. 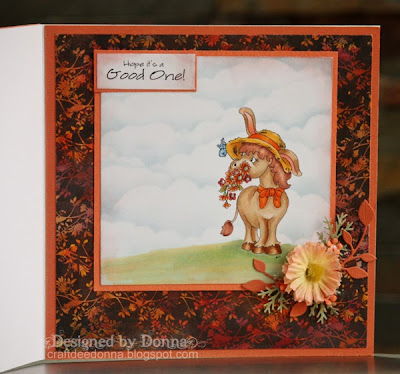 The papers are Prima's Fairy Floral on the front and Basic Grey's Indian Summer inside (though that was a bit "pink" so I went over it with Copics to make it more autumnal). We're not the only ones having an Autumn challenge; Bearly Mine Challenges, Corrosive Challenge and My Time to Craft all have Autumn colours, Deep Ocean Challenge has Goodbye Summer (hello autumn?) and Card Mania Challenges has Favourite Colour Combos this is definitely one of mine :-)
I reduced and flipped the image of Daphne and added it to a jotting panel inside the card.
The mats are Bazzill I think, though the inside and outside don't quite match, so one may be something else! 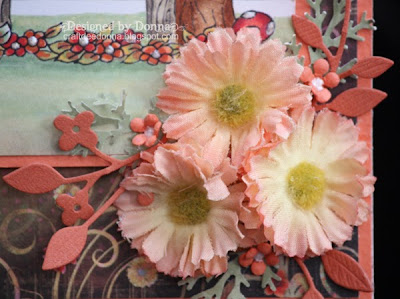 I used some of the orange card from the mats to cut a Memory Box Lavish Branch die, which I then cut up to use in my floral arrangement, along with some greenery cut with a Martha Stewart Branch punch.  The daisies are from my stash (they were on a long stem from a discount store for $2, love a bargain!).  The small flowers are a Carl punch (I think) with Viva Decor Pearl Pen centres,  Cuttlebug Mania have a Back to Nature challenge so I'm in there. 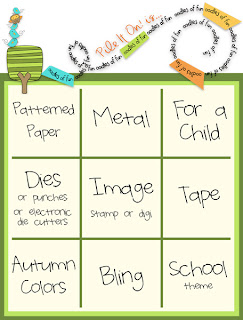 Cute Card Thursday have It's Hip to be Square, so I'm in there too - I'm pretty square and my card certainly is, lol.
Pile It On have a Bingo challenge; I used the Patterned Paper/Dies or Punches/Autumn Colours line though I could have used Autumn Colours/Image/For a Child line too.
I made the sentiment on the computer, I'll have it on my freebies page shortly, though it did only take about a minute to do :-)
Well that's just about it for today's card... very easy really, Through the Craftroom Door, Addicted to Stamps, Totally Gorjuss, Seize the Birthday and Hobbycutz all have Anything Goes challenges running so I'm entering them all.
I hope you get a chance to check out the rest of the Di's Digis team's inspiration, and get a chance to enter the challenge too... we have a great prize from Crafty Ribbons, and of course if you use one of Di's uber cute images, you're in with a chance to win two more!

It's been raining HEAPS here today, we still managed to get a bit of blue sky and sunshine in, but it only got to 18C and is blustery tonight - feels quite autumnal, lol.
I didn't come to Australia until I was 13, living in Wales for six years before that - it rains here differently to there; very heavy but not for days on end (well that's how I remember it, but then I was a kid and maybe it just seemed that way!)
We have already received our average rainfall expected by the end of September, so above average to date, just as well as we have been miserably short for years and our dams are down to 30% capacity.  The Eastern States of Australia are just about up to capacity, but we in the West are a long way from there... in fact we are quite a bit closer to Singapore than Sydney so their weather doesn't necessarily relate to ours.  There I go waffling again!
Until next time, Happy Crafting, Donna
Posted by Craftdee at Saturday, September 14, 2013

Your card is gorgeous Donna. I love the images, your colouring is wonderful and the papers and details are so beautiful too.
Interesting what you said about the rain, my mum spends 4 months a year in Cyprus and says the same thing.
I hope you are having a good weekend and that your son is continuing to make a good recover.
hugs Sue xx

Stunning card Donna. The image is adorable and I love the scene you've created.
I hope you're having a lovely weekend
Lorraine x

Thanks for sharing your darling image and card with us at the Corrosive Challenge Blog. This is a beautiful design and cute and sweet card.

Oh my, this is simply gorgeous - so much detail. Thanks for playing along at Cuttlebug Mania this time x

so darn cute! those flowers match perfectly! and the inside is as pretty as the outside.
thanks for sharing it with us at Pile It On.

Wow, gorgeous coloring in your card, the image as well as the papers and flowers. So many pretty details. Thanks for sharing with us at Seize the Birthday.

oooh this is fabulous Donna!!thanks for joining us at Bearlymine this time
hugs
laney

Such a beautiful card and pretty image, love the design and lovely colours. Thanks for joining us at Card Mania Challenges. Good luck and hope you'll join us again.

Love your cute card, fab scene and clever use of the digi's, thanks for sharing with us at Deep Ocean, hugs Liz xx

What a lovely card you have made here which fits perfectly the Bearly Mine Designs Challenge this week of “fall colours”. Thank you for entering and best wishes in the draw. Kym (Bearly Mine Challenge Blog Design Team)

What a beautiful autumnal card I love the colours, thanx for joining us at HobbyCutz Challenge, good luck John x

Lovely card Sweetie.
Thank you for joining in My time to craft challenge, good luck x

Beautiful card! Thank you for playing along at Card Mania! Good luck! And hope to see you play along in our next challenge on Monday! Ani

I enjoyed my visit with you!! I ♥ your posts.

I just had to "follow" you so not to miss anything! It would make me so happy if you would follow me too. :)

Have a beautiful weekend ahead!

Hihi this is so cute! Such a funny image and perfectly colored. Great fall colors and fabulous composition. Thank you for joining us at Seize the Birthday. Hugs, Macarena DT

This is such a wonderful card! I've seen this in seize the birthday challange. Nice colors and layout! Cheers!