Today is my Son and Daughter-in-law's second wedding anniversary.  I made them a card...but of course! 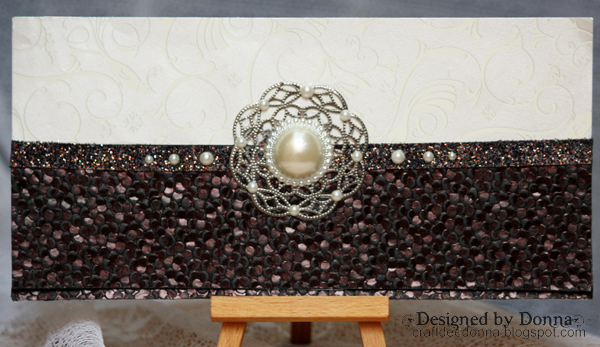 Matt and Elaine favour this sort of streamlined look, I find it quite hard to not have an image to colour!  The cream paper is left over from their wedding invitations (I like this sort of synergy I use paper that a gift came wrapped in on thank you cards, and that sort of thing) The textured dark paper (the other principal colour for their wedding was black) is sensational: it's so hard to see in the photos, but it is a dark brown/black with an iridescent teal and ruby sheen...GawJusss! 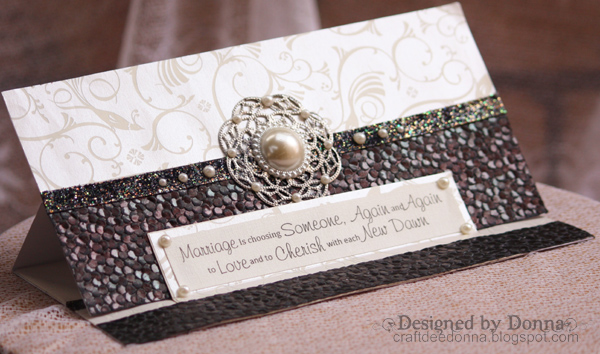 I couldn't find a ribbon that "went" with it, and as I wanted to add some bling (in a subtle sort of way!) I borrowed an idea from my blog friend Woo and added double sided tape to a strip of black ribbon, sprinkled lovely Fire Fox glitter on it then zapped it with my heat gun...which set it beautifully.  Papertake Weekly has Anything Goes with the Optional use of Bling...so I'm entering there. 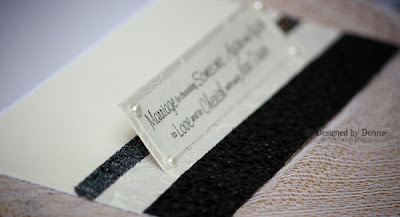 Obviously it is an easel card, I made the sentiment on the computer, printed it on linen card and attached it to a piece of card that I used as the stopper for the easel: This piece of card is scored where I want it to fold up, then tucked under the black paper on the base. I tried to photograph it so you can sort of see how it works in these pics. 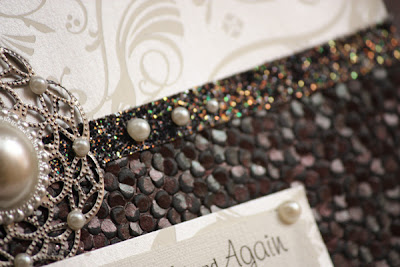 The filigree metal embellishment is from IPaper, I added the large flat back pearl in the middle and the smaller pearls.  Three graded pearls on the faux ribbon help bring it together.  Divas by Design wants us to Use Metal in their current challenge, so I'm entering there, and One Stop Craft Challenge has Use 3 of something; my three pearls -twice -get me in there, but only once, lol
Craft Your Passion has a Bingo challenge: I've used Pearls, Free choice and Ribbon, I was going to use Punch Sentiment Bling, but this must be my first card ever that I didn't use a punch on, lol!
That's about it for this very simple card.  It took a bit of working around to get it how I had originally imagined it... but I'm really happy with the way it has turned out - I just hope Matt and Elaine are too! 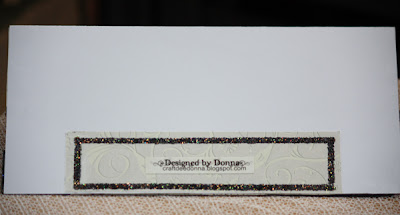 I had tried out some glitter around the sentiment too, but it didn't work out; rather than wasting the piece I used it as a backer for the little sticker I put on the back of my cards, excessive? Probably!  The sentiment suits this size card (fits DL envelope)  I made it in Word, but will convert it to a jpeg if you'd like to grab it from my freebies page.  Allsorts Challenges  has Anything but a square as its theme and Pollycraft has Anything Goes; it's not square, and it's definitely "anything" so I'm in :-)
I'm colouring like a fiend at the moment; I've got a couple of DT releases and reviews coming up next week - all on Thursday and Friday.  I'm trying to finish a couple of other things in the meantime, I'll see how I go.  Either way, until next time, Happy Crafting, Dee... for Donna (yes, I may have to be "Donna" on my blog, as there has been a few issues with another Dee in blogland; nothing sinister, just several mix-ups that I could almost foresee and would prefer to prevent in future, so I may just have to be "Donna" for at least the time being - not a problem, it is my name after all :-) 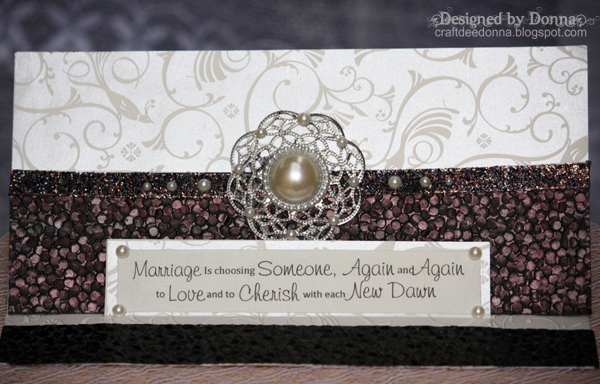 So beautiful Donna...that dark card is stunning hun and so is metal embellie....

thanks for joining us at Divas....and good luck..!

Thank you so much for sharing with us at Allsorts this week and good luck.

So elegant - thanks for playing along at Craft Your Passion this week!

Fabulous card and very elegant with lovely papers :)
Thanks for joining in at Allsorts this week for my Anything but square challenge and good luck in the draw!
Hugs, Jill

Ooh this is gorgeous hun! Beautiful papers and fab design, they'll have loved it I'm sure :o) Lisa x