Firstly, this post is a day late... I'm sorry :-(  All I can say is "Save" is NOT "Publish".
Yup, it's December... time for a new challenge at Crafty Hazelnut's Patterned Paper challenge.  Being DECEMBER, it HAD to be a Christmas card... here it is :-))

The paper I've used is from Wild Rose Studio... the Annabelle's Christmas Paper Pack.  It's a really nice collection of prints, the paper is lighter weight than I usually use, but it cut "cleanly" which is my main reason for using heavier paper, so all okay. 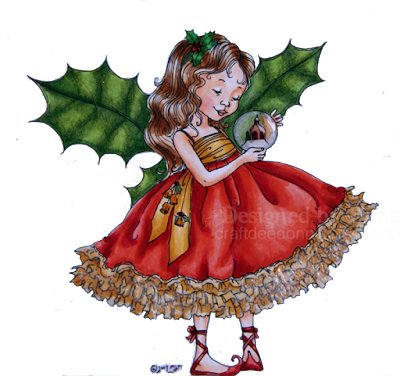 I have had the image "Christmas Fairy Holly" in my cyber stash for a few years now, I just think she's gorgeous!  It's a Mo's Digital Pencil image available here.  I've used my usual combination of Copic markers and Prismacolor pencils to colour and added gloss to the snow globe... it looks quite "globular" in real life, lol.  I also added gloss to the berries in her  hair and the bells on her sash -  and Viva Pearl pen (Creme) to the ruffles on her petticoats; you all know these things look better in real life, right?? :-)  I used Viva's Ice White Pearl pen to add the falling snow. 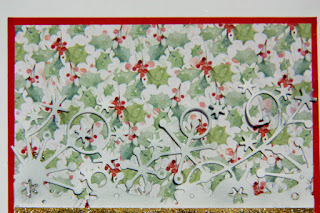 Those Lawn Fawn Stitched Hillside Border dies have come into play AGAIN... what can I say? I love 'em, lol.  I used Memory Box's Frostyville border die in gold glitter card to add interest to the top of the image matt.  Obviously I used gold glitter for the other matting too.  The ribbon is from my stash... though I remember buying it in Spotlight for a song!  Hope they've still got some because this was three short lengths I had in my scrap box! 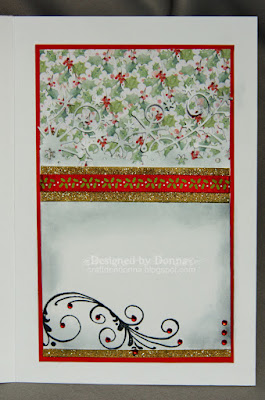 I have stamped the sentiment, yup, STAMPED... not digital - an actual rubber STAMP, hehe.  I rarely stamp directly on the image panel, because I'm really BAD at it, crooked nine times outta ten, lol... but not anymore; I bought a Stamp a Ma Jig, who knew a (alright let's face it, overpriced!) bit of plastic could make SUCH a difference?!  Of course, doesn't matter what it cost now, lol.  Another of course is it didn't stop me from getting ink everywhere... which is the reason I added the inked border- to cover a fingerprint, so not quite the CAS I was aiming for at the start, but I actually think it softened the whole look, so a happy accident :-)
I added some red rhinestones to the sentiment, and three to the other side to balance it out - don't worry, once I saw the pics of the card I moved that top rhinestone so they're straight now, I just couldn't be bothered taking another photo, lol.
The stamp (yup, rubber + Stamp a Ma Jig) on the inside is from a PortaCraf set I've had for years, I've got quite a few rubber stamps that might just get an outing now.  I used the Frostyville border die again, isn't it amazing how different it looks cut in white compared to gold/glitter?
That's it... another really simple card, the look I'm favouring at the mo. I have had some real problems with Photoshop (as in Editor won't open, well it will NOW, but it took some fixing) and have had to use Photoscape to resize and watermark this card... bit of a learning curve, taking time I didn't really have, but I think I might use it more often now I know how.  It's good to have a backup plan too :-)
I'd like to enter this card in the following challenges.


As You Like It Favourite Season and Why (Christmas - Family get togethers and the feeling of goodwill, just LOVE Christmas!)
Clear It Out  Theme: Holiday - Christmas Stash: Glitter
Cute Card Thursday Fairies and Angels
My Time to Craft  Let it Snow
Gem of a Challenge Inspired by a Christmas song or carol (I'm Dreaming of a White Christmas… Holly looks like she is with that snowglobe!)
Sweet Stampin' Sparkle and Shine
Bunny Zoes Crafts Sparkle
Pile It On Use Red and Green
Crafty Hazlenuts Christmas Challenge Die Cuts and Punches
Hiding in my Craft Room Any Holiday
Creatalicious Challenges Merry Christmas
Cutie Pie Challenge Simply Cute and Christmassey
Card Mania Challenges Christmas
Crafty Hazfelnut's Christmas Extra Challenge Anything Goes Christmas
Pixies Snippets Playground Use snippets… of Anything (card, ribbon etc) -The white die cuts are from "those" bits of card leftover when you make a card base :-) and it's the last of my ribbon (it was in three bits, only just managed to get the bow!
Jingle Belles Use Leftovers (see above)
Aud Sentiments Anything Goes + a Sentiment
Outlawz Friday Colouring Challenge Anything Goes, optional Twist: Christmas
Inky Chicks Merry Christmas
Whimsy Inspirations Challenge Anything Goes Holidays
and all the following are "Anything Goes" challenges:
Craft Your Passion
Li'l Patch of Crafty Friends
Addicted to  Stamps
The Crazy Challenge
Art by Miran
Simon Says Challenge
Papertake Weekly
Through the Craftroom Door
I hope you get a chance to enter the challenge, it's SO easy... and a great prize on offer as always.  Check out the rest of the team's inspiration here
Other things have been occupying my time too.  My Mum has been very ill.  She has ongoing high blood pressure problems, that they just can't figure out; she weighs only 38.1 Kg (which is 83lb or just UNDER 6 stone) and has been fit as flea all her life, really looking after her health... Last Sunday she rang me quite distressed saying she felt very unwell; for her to ring me is unusual, she never complains.  My sister happened to be up from the country so we took Mum to the Doctor - he took her blood pressure and it was 244/115; he called an ambulance, I went with her, my sister saw to Dad (who is a little lost these days) it was awful.  The Paramedics were lovely, but they were clearly very concerned.  Her blood pressure didn't drop below 238/110 all day... then it dropped like a rock to 124/60 which they said was not good (it dropped too fast) so they took the Nitro patch off - which is when "the" headache came back, sigh
Anyway long story short, Mum was in hospital until Friday, she's had a barrage of tests and they've decided she must be "one of those people who are just Hypertensive"....d'ya think??  They have got her blood pressure down to 151 in the mornings - she has the reverse of most people, her blood pressure rises when she gets up - so relatively speaking she's good.  Seeing Dad in that situation has brought up a lot of issues; he is so dependent.  My sister stayed with him for the week, but she lives 400km away - I don't know what will happen if Mum is in hospital for any length of time or worse... I just don't see how I'll be able to do it all myself.  Oh well, I suppose we'll cross that bridge if and when we come to it.  It is the curse of having extremely elderly parents - but the blessings of having them with us fit and healthy AND independent for so long far outweigh the pitfalls.
Until next time, Happy Crafting, Donna
Posted by Craftdee at Wednesday, December 02, 2015

This is a beautiful card. Thanks so much for sharing the process! Thanks also for joining us at AYLI Challenge this week! Brenda

Ohhh my goodness, this card is so so beautiful. All the detail and your wonderful colouring. so talented WOW

Amazing Colouring, the holly leaves look so real! Thanks for sharing with us this fortnight. Lisa DT Aud Sentiments Challenge

So sweet & angelic. Very elegant. Thanks for joining us for our 'Anything Goes' challenge #46.
Alicia (Art by Miran DT)
MaxiBelle Studio

EVERYTHING on this card is so lovely, Donna, a little masterpiece! Love your mix of that adorable stamped image, beautiful coloring, the perfect design paper, and the glitzy gold! Even the ribbon works beautifully! Thanks so much for sharing it with us at the Simon Says Stamp Wednesday challenge!

Hi Donna! I'm almost certain this is your very first trip into the Snippets Playground? I've spotted your name in blogland BTW and am so pleased you're playing along with us!I've searched my blog and also yours and am almost certain it is. your first visit Could you please let me know as I do like to welcome new playmates.

And what a stunning card this is too! First off, the Annabelle's Christmas paper you used is one of my favourites and the image is just beautiful! Your colouring is amazing, just perfect! LOVE the gold Frostville die cut with the rich reds - a wonderful and beautifully designed (and made) card!

Gosh what a worry about your Mum, and also your Dad - I hope things settle down fine.

Gorgeous card, beautiful colouing and a fabulous job. thanks for joining us at Clear it Out Tuesday for the Christmas/Glitter challenge.

super cute image! love all the amazing sparkle on this! great addition to our buffet of "holiday leftovers" at JINGLE BELLES! :)

Beautiful coloring ... love the glittery sparkle ... so very glad you joined us with your holiday leftovers at Jingle Belles.

Your card is beautiful Donna, love the image and all the glittery diecuts are perfect for our Sparkle and Shine challenge at Sweet Stampin this week. Thanks for joining us and don't forget to check back to see if you're our winner on Sunday, love Jacky x

Such a cute CAS card!! Perfect for the Cutie Pies this time!! Sarah :0)

So gorgeous, love that image and your coloring is fabulous!
Thank you so much for entering our ATG challenge at Through The Craft Room Door this week. Looking forward to see you again next challenge.

What a beautiful card design and stunning colouring work on that fabulous Mo Manning Christmas fairy. Love the gold sparkle die across the top too. So pretty and so perfect for our big birthday 'Sparkle & Shine' challenge at Sweet Stampin' this week. Thanks so much for joining in the fun with us and we look forward to you playing along again soon. Hugs, Wends x Sweet Stampin' DT

Lovely card, well done! Thanks for joining us at The Crazy Challenge.

Such a pretty card, thank you so much for sharing.
Greetings Veerle DT - Addicted to Stamps challenge blog

This is a piece of at! LOVE it soooo much! Fabulous!

Great card. I love the leaves. Thanks for sharing with us at The Crezy challenge!

I am so sorry I'm late to thank you for such a beautiful inspiration for my Patterned Paper December challenge and thanks for sharing for my CHNC challenge extra for Christmas - hope to see you there again soon. x