Well I've finally found a bit of time to drag a card out of my Drafts Folder; it's the oldest I have in there... the card I made for my granddaughter Emily's first birthday; FIFTEEN months ago - ye gods and little fishes, where did the time go??  I was going to put both the twins' cards in one post, but decided to make two posts out of it, better value for money 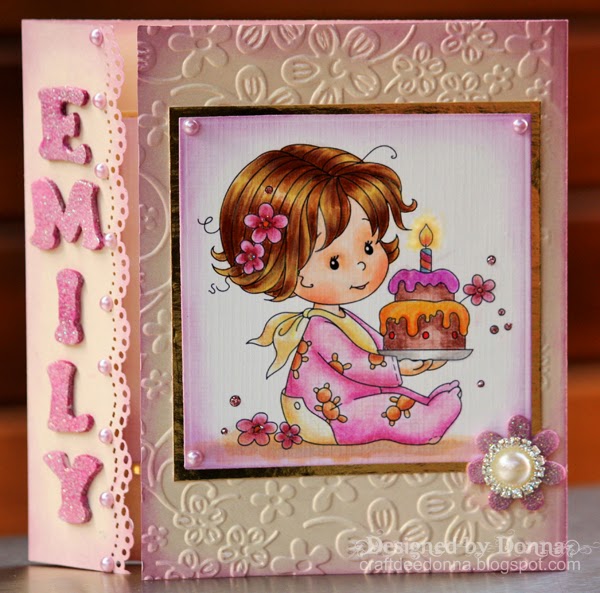 I don't know if this fold has a name... all it is is a piece of A4 card (in this case cream pearlised) with one end folded over to make a flap and the other end folded so the main front piece just fits under the flap when it's closed.  It's size is always determined for me by what punch I use to decorate the edge of the flap; if I use a shallow-ish punch (like the Martha Stewart Doily Lace Edge punch I've used here) the fold at the other end is made in one place, if I use a deep punch (like another Martha Stewart punch I use, Garden Trellis... which is being discontinued apparently, I'd better check out any I want before they go!!) it's made in another.  I usually then cut the "height" to make the card square, but as I have some rectangular envelopes in my stash I decided to cut it down to fit one of those. 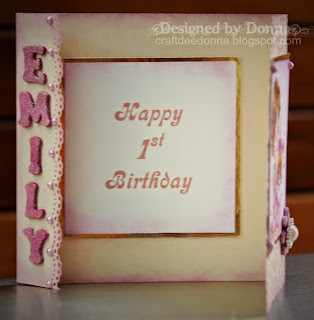 I embossed the main part of the card with an Embossalicious Folder, Floral Frenzy, and inked all the edges with Orchid Versamark ink.  The letters making up Emily's name are self adhesive foam, from the kids section at a local craft shop (pack of a gazillion for $2) I coloured them with Copics then coated them with Ice Stickles... I did heat emboss one and it distorted a bit... not as much as I was expecting, but still wonky :-) .... so I defaulted to the ol' Stickles.  The inside of the card has a simple computer generated sentiment, mounted on gold foil card.... the embossing on the front of the main panel actually adds to the texture of the inside, I haven't bothered taking a pic though, you'll have to trust me on that one :-)) 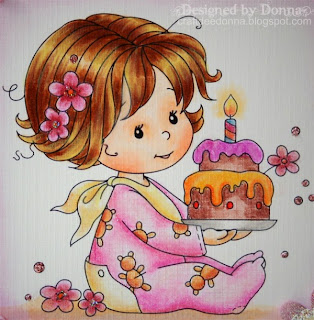 Now we get to that GORGEOUS image; it's one of Sylvia Zet's fabulous Wee Stamps images, I've had it for a while, saving it for a special occasion... my only granddaughter's first birthday qualifies, lol.  It's called simply Birthday Baby Girl and is a digi; imagine my horror when I popped over to Whimsy Stamps to grab a link and saw that the dreaded new European VAT laws have caused a (hopefully temporary!) closure of the digi section of the store... it is available as a rubber stamp so if you (unlike ME!!) "do" rubber you can still have it.  I SERIOUSLY hope it... and so many of my other favourite digi stores can find a way around these problems, I may have a LOT of digis, but there's still a LOT I'd like to get!
I coloured with some Copics and Prismacolor pencils (mainly the face with Copics, this is printed on linen card and I don't do a great job with pencils on faces with textured card!) I matted on gold mirror card, just for a little lift.
The flower is foam... can't remember the punch I used, coloured and Stickled, the pearl centre is from my stash as are the pearls

AAA Cards is celebrating their first birthday and have a birthday theme using this pic as inspiration (and CAS or Near CAS as an ongoing requirement) so Emily's First Birthday card is going to be entered there as well as in these challenges:

I'll be back in a day or so with Nathan's FIRST Birthday in a day or so... truly!  Until then, Happy Crafting, Donna
Posted by Craftdee at Sunday, May 17, 2015

This is gorgeous Donna, such an adorable image and I love your pretty design.
hugs Sue xx

Beautiful card, love all the details, your image is coloured so beautifully too. Thanks for sharing your creation with us at TTCRD this week and good luck
Andrea x

Love that fold, must make the card very stable when it's standing up. Such a cute image too, who could resist? Thanks for joining in AAA Cards birthday celebrations.

What a sweet card. Love the embossed backgound too. Thanks for playing along with us at LRW!!

This is an adorable card. I love the fold that you used and the baby is so cute. Great coloring with her. Thank You for sharing with us over at LIL Patch of Crafty Friends.

Hi There, Donna! It's been a while since I've stopped by your blog since your GDT time at Sketch Saturday
.
I'm here from Lil' Patch of Crafty Friends. I love this sweet, sweet girl. The eb folder is fabulous. Your coloring is fabulous and your card is just precious! Emily is on lucky girl!! Thanks for linking your card with us at Lil' Patch of Crafty Friends. Hugs from, Cathy xx

SUPER sweet card! Thanks for joining in at AAA!

I saw your card at AAA cards and came over for a peek. Your card is soooo cute. Thanks for sharing.
Crafty hugs,
Dawn
DesignsByDragonfly.blogspot

Beautiful design and I love your colouring of the image.

Thanks for joining us at A Gem of a Challenge.

Aw, how sweet is this and certainly a "keeper" for Emily's scrapbook. I saw your creation on SAS4Kids and had to take a closer look. Fabulous coloring!

pretty work, thanks for joining Craft Your Passion challenge this time, hope to see you again!

Wooow.. super cute card.. Thank you for joining our Anything Goes challenge # 32 at Art by Mi Ran challenge blog.. Hope to see you again in our next challenge.. Good luck.. ;)