Get Yer Sunnies On, We're Set To Sparkle!

As always the time has FLOWN by and it's time to start a new challenge at Di's Digis Challenge... the theme this time is "Sparkle"; as you can see by my offering, I took the brief pretty seriously - like I said, get yer sunnies on :-) 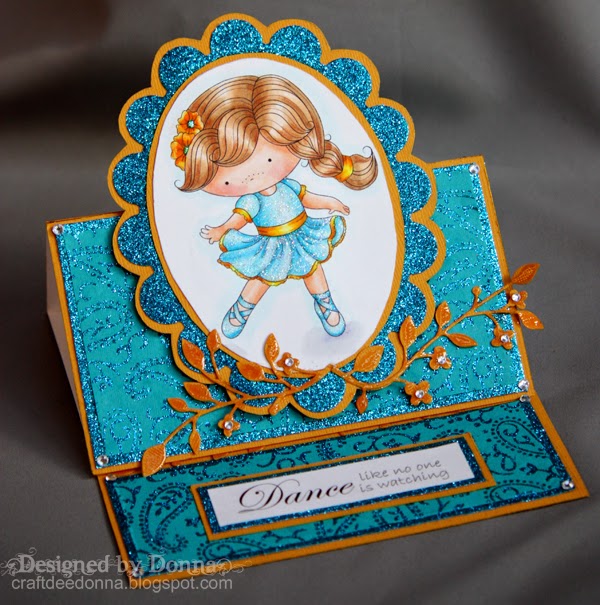 Actually, you may not need the sunnies... sparkle is SO hard to photograph - you can see where the sparkle IS in this pic, but IRL it'll have your eye out, lol. Card Mania Challenges has Make It Sparkle and Corrosive Challenge has Shiny and/or New as their theme, so I'm entering there... my paper is new, as is the image so I'm entering the Papertake Weekly, OSAAT, Crafty Calendar and Fab'n'funky Challenges which all have "New" themes. 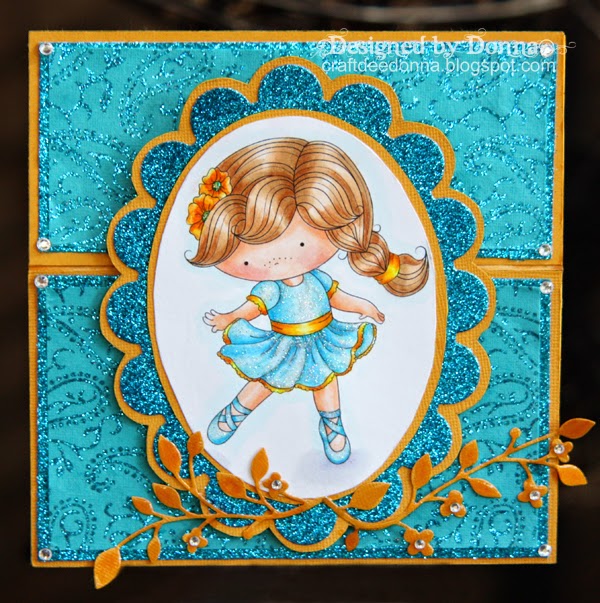 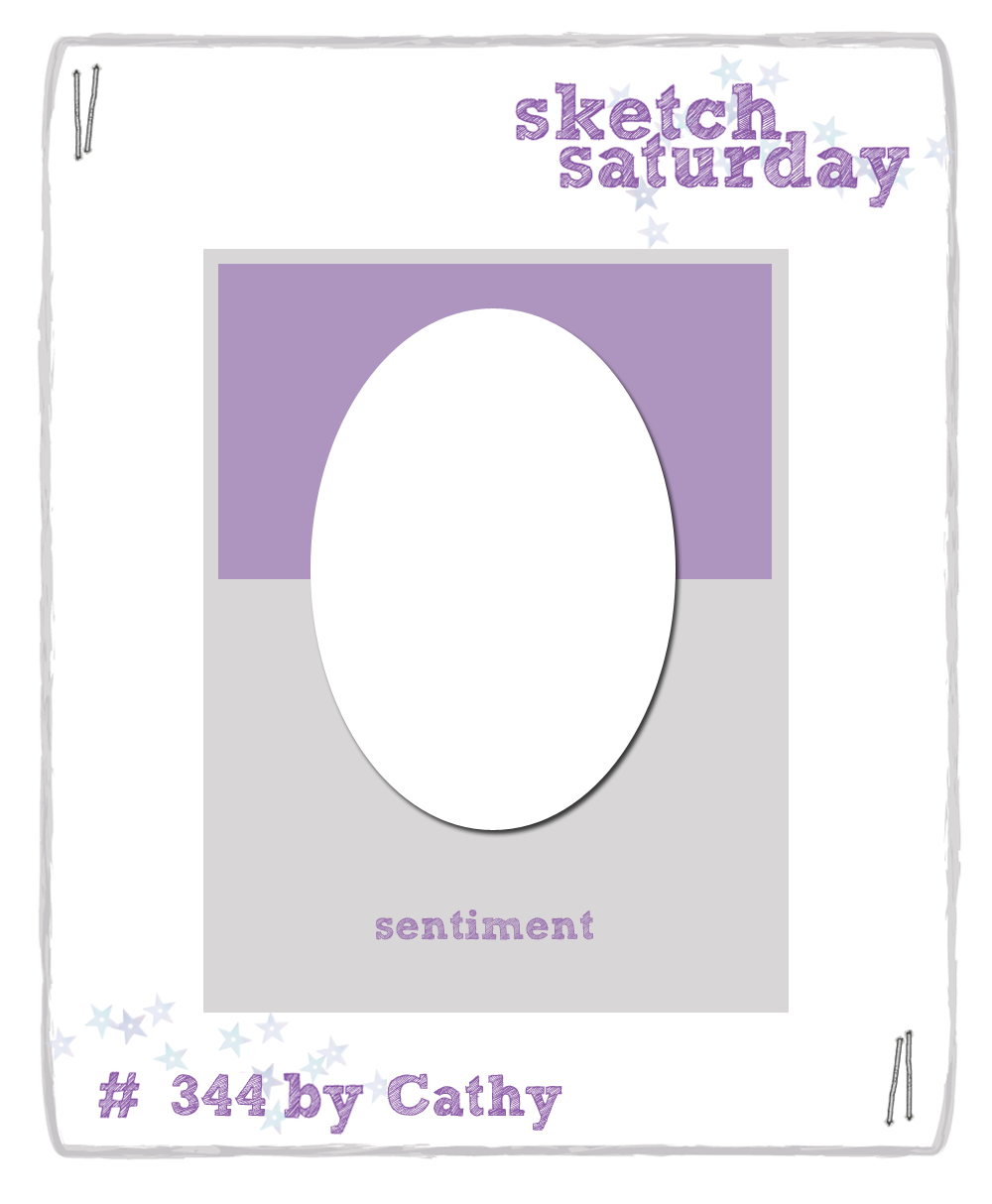 I've made an easel card, my favourite fold, I like it as it's a bit "different" than most store bought cards... and you get to show off some of the "inside" of the card without opening it!  I scored the card in the "wrong" place resulting in this card laying down a bit further than usual. The sketch from Sketch Saturday lends itself to this sort of card... with the image protruding above the fold.
The image is Ballerina Izzy, you can find her here.  I've coloured with Copics, adding some Prismacolor shading and oodles of Stickles to the dress and and the centre of the flowers. 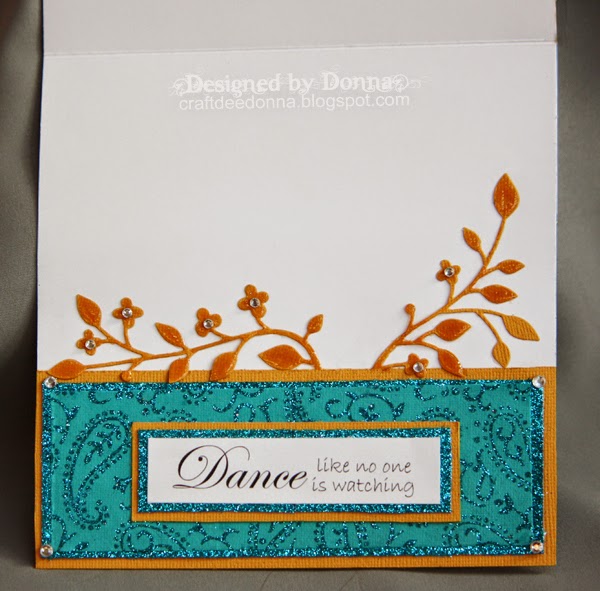 I used mustard cardstock from Kaisercraft for the first layer of matting, and the blue SUPER glittery card is from Merci.  Crafty Creations has "The Blues" as their challenge, so I'm entering there.  The paisley patterned paper is from my favourite "specialty" paper store, Starfish Lane - it's gorgeous IRL. The blue mat was cut with the biggest die from the Mpress Petal Frame set, I used the die as a template to cut the mustard mat.  The leafy flourish is Memory Box Lavish Branch, I gave it a coat of Glossy Accents, to add some more "spaklyness", and some rhinestones to that to add some more!  The Paper Shelter and Moving Along With The Times have Dies and Punches challenges, so I'm entering them.
The inside of the card is finished with another Lavish Branch.  I added some rhinestones to the corners of the horizontal panels... using the ones on the inside/base as a stop for the front/top.. whatever you call the "easel" bit!  The sentiment is computer generated.
Through the Craftroom Door, Paper Creator Crafts, Art by Miran, Inky Chicks, Little Miss Muffet and Aud Sentiments all have Anything Goes Challenges running so I'm entering those too.
That's it for today's card, hope you can pop over to the Challenge Blog and check out the rest of the tam's inspiration... hope you get to enter the challenge too, there's a great prize on offer from Crafty Ribbons... and if you use an image from Di's Digis you go in the draw for an extra prize, yeehaw!!
I absolutely WILL be back in the next few days with a card from my drafts... I'm adding to it and need to MAKE time to get some blogged.  I have been blogging; I've been very "active" on the Bonesmart blog, seeking and hopefully providing some support for the "issues" of Total Hip Replacement... I haven't quite had the dream run home I was hoping for; nothing terminal, "just" tendinitis - pretty uncomfortable and slooooooow to respond.  Enough whinging, I'll be back soon... with a card!  Until then Happy Crafting, Donna
Posted by Craftdee at Saturday, January 17, 2015

Such an adorable easel design and I adore the sparkle and wonderful blue colouring.
Hugs Desíre {Doing Life}

Absolutely darling! And look at all that sparkle and shine! Such pretty colors and papers! Thanks for joining us at The Corrosive Challenge!
{hugs}
Regan
DT Coordinator

Fabulous card and the sparkle I love this sentiment Ginny x

Very very pretty! I love all the glitter on here it's gorgeous, and the image is toooo cute! Thank you so much for entering the Crafty Calendar (Something New) Challenge this month, lots of luck.

Hugs to you Sue Pxxx DT

This is gorgeous Donna. Love the image, the design and all that sparkle!
Enjoy the rest of the weekend
Lorraine x

This is gorgeous Donna, such a sweet image, beautiful colours and wonderful sparkle.
Sue xx

Super sparkly and super cute. Just love your easel card, the colors you chose and of course the lovely bling. Thank you for playing along this week at OSAAT. I sure hope to see you back again very soon. Good Luck in the challenge!!!

Fabulous beautiful card and so cute too.
luv
Debby

Oh this is super, love all the glitter you have on it. Thanks for sharing with us on MAWTT this week, Love Hazel (Didos) xx

This is so charming, loving your design, colors, image and your sparkle. Thanks for sharing with us at the Crafty Creations challenge. Barb

Wow, such lush paper, love that paisley design. Thanks for joining in the fun at Fab 'n' Funky for our first challenge of 2015. Hugs, Wends x Fab 'n' Funky DT

What a beautyful card you have made!
Thanks for joining at TPS
Greetings Maria

Adorable image that is colored to perfection. I LOVE this kind of card fold and haven't mastered doing it well. This is a fabulous card! Thanks for joining us at The Paper Shelter this week! Hugs, Gail

Lots of lovely sparkle, lol. Cute image, beautifully coloured. A delightful card. Thanks for sharing with us at Aud Sentiments Challenge Blog this fortnight.
Hugs,
Sandy

Wow, this is beautiful!! Very sweet image and I love the colors!
Thanks for joining the TTCRD challenges.
Hugs,Sandra

Beautiful hun, lovin all the sparkle & the colours you have used...perfect!
Hugs Shell xx

Cute image, wonderfully coloured and wow... this glittery paper background is gorgeous! Thanks for joining us at Sketch Saturday!
;-) Alex H.

Gorgeous easel card.. love the colour combination... Thank you for sharing your talent with us at Art by Mi Ran Challenge #23.. good luck ;)

Very cute and lovely bright card. Thanks for joining us over at AUD sentiments.
Love n hugs
Marie

Well done! :) Thank you so much for entering our challenge at Card Mania.
Marzena DT

Hi Donna, this is a beautiful card, such a fabulous design - lots of lovely sparkle.
Thank you for joining us at Paper Creator's Crafts.
Pauline
x
I have candy on my blog if you would like to take a look - http://craftingwithcotnob.blogspot.co.uk/