Just for a change, and because I still want to "create" but have a  burgeoning stash of cards, I've made a couple of bookmarks... one for me and one for  hubby; today I'll show you "mine"!! 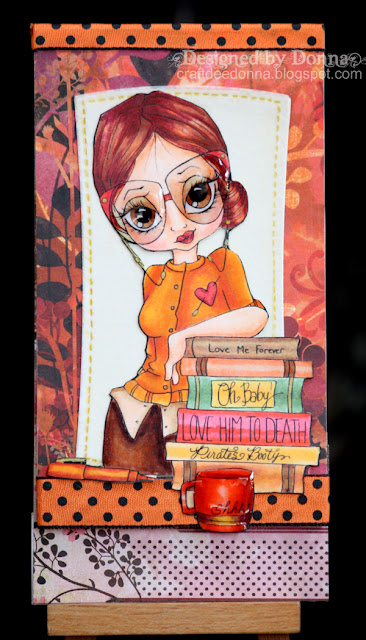 This is a magnetic bookmark, I found a tutorial on YouTube, Here, and jigged it around to suit what I wanted... it's very easily "jigged", lol. I made the back longer than the front to show off some of the paper from the inside.
One of the best hints is to not use too strong a magnet, I've used pieces of magnetic tape, and that's enough to still clip "closed" over a couple of pages. it works a treat. 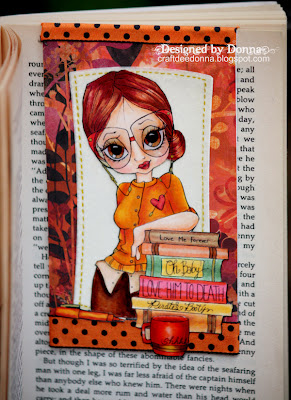 I've had this fabulous Saturated Canary image What The Librarian Reads in my stash since Krista released it, waiting to be used on a project... I figured that a bookmark was appropriate :-)   Bearly Mine Challenges and Stamptacular Sunday Challenge have Anything But A Card as their themes, so I'm entering there.   I've coloured with Copics and a touch of pencil, with lashings of gloss on her glasses and her mug.  I fussy cut the image then glued it directly (no foam pads, you don't need dimension when you're fitting a bookmark between the pages of a book, lol) on to a panel of cream backed patterned vellum (the pattern doesn't show in the pic) cut using an impress Curved Rectangles die.                     The paper is from Basic Grey's Indian Summer collection... autumn is my absolute favourite time of the year, we're heading towards summer here in Australia, so it was kind of poignant using autumn-y paper :-)
I'm not the only one that likes autumn, Cute Card Thursday, Without Words, Paper Play Challenges and 2 Sisters Challenge all have autumn themes, so I'm entering there.  The Pink Elephant has Use Patterned Paper... easy peasy, I'm in there too! 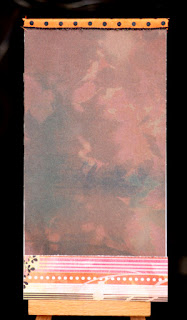 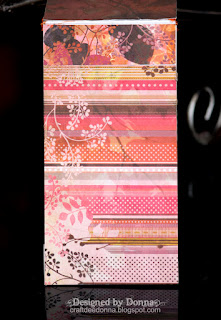 The only embellishment on this card is the gros grain ribbon, I ran it around to the "inside" of the bookmark and then glued a piece of the patterned paper over it to cover it and the magnet, I covered the very back simply because I wrecked the card by inadvertently gluing it to my work table! I thought the dots on the ribbon  tied in with the so-much-more-subtle dots on the paper, the Joanna Sheen challenge is Going Dotty, so I'll be entering there.  The One Stop Craft Challenge is No Floral Embellishments, no floral embellishments here, I'm in - and The Cutie Pie Challenge is no flowers AT ALL, I've checked and there's no flowers here, only leaves, so I'm in there too!
Even though this bookmark is for me, I think it fits the Back to School theme that is running at Di's Digi Designs, The Secret Crafter and Crafty Creations so I'm entering there and I know it fits the Anything Goes challenges at Papertake Weekly and My Mums Craft Shop so definitely entering there! 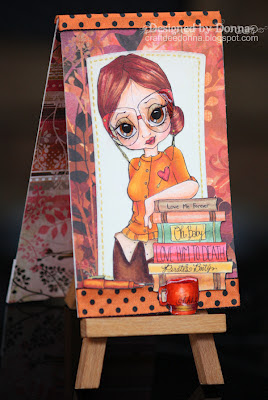 Well, that's it for MY bookmark, my hubby's is super simple but as I haven't taken a photo of it I'll be back with it another day.
My son Chris is involved in a fund raising activity at the moment, actually, he's always involved in some fund raiser or another - last month it was the City to Surf "fun" run, which involved running 12 kms and didn't float my boat at all, lol - this one is art based, I'm donating a couple of my paintings and thought I'd make a couple of these bookmarks to go be sold for a gold coin donation; last year Chris sold a couple of his paintings for $600 each! I'm sure not everyone is in the position to donate that, but everyone can afford some loose change.
I'm off to bed, though I'm in no rush as the dreaded night sweats (menopause is so much harder than I was expecting!) keep me uncomfortable all night and worried about disturbing hubby... though he's not working tomorrow so it's not such a concern as usual!
Until next time, Happy Crafting, Donna
Posted by Craftdee at Monday, September 10, 2012

hope you get a better night sleep...I have been on HRT for the past 6yrs...lol..So I know how you feel..!

Love this Donna, what a fab idea, will definitely be having a go at this.
Hugs
Caz x

WOW! This is wonderful Donna. Such a fabulous image and your colouring is brilliant. I love the papers and the spotty ribbon looks great.

You have my sympathies with the night sweats.

WOW! this is gobsmackingly gorgeous Donna, love it!

What a gorgeous back to school creation, love the image, thank you for joining us at the Secret Crafter Saturday Challenge
Hugs Kate xx

What a fab bookmark. I love the image and papers. Beautiful! Thank you for joining us at 2 Sisters this week. Good luck. Hugs, Jill x

Gorgeous book mark, and what a pleasure to use its beautiful. Thanks for joining us at Bearlymine, good luck with the challenge. hugs Shirleyxxxx

Beautiful design and layout, thanks for joining us at Cutie Pie challenge. Good Luck cheers Sue and Wendy x

Very cool idea! :) Think I might try this one out since I read a lot of books myself - but I can't keep track of my bookmarks :)
And I love, love, LOVE those Saturated canary stamps! :)
Thanks for joining us at CCC this week!

Gorgeous autumn colours and a fabulous image, love it! Thanks for joining us at Without Words. Hope you will be able to join us again next month. Hugs, Sxx

gorgeous creation! Thanks for joining in with our Anything Goes challenge this week at My Mums Craft Shop!! Gemma :)

This is such a great idea and one I will try to case! Great colouring and such a great focal picture for a bookmark. Hope you are getting some decent sleep!

Your bookmark is fantastic, Donna! Perfect image and I love the glossy embellishing. I've seen these bookmarks commercially before, but it has never occurred to me to actually make one - duh... they would make perfect little stocking stuffers.

Hope you've been able to get some good sleeps.

Your bookmark is gorgeous, Donna! Such wonderful colours and I love the design! Thanks for joining us at Without Words, hope to see you tomorrow for our new challenge too:-)! Hugs Delphine xx