"Time spent with friends is time well spent" is the sentiment I made for this card, and I really believe it to be true.  These little cuties are in the latest digi release by CC Designs, available at All That Scraps tomorrow.  This is my second post for today, the first (here) uses a different image from the same release; You can see more cuteness on the ATS Blog with the fabulous offerings from my talented teamies! 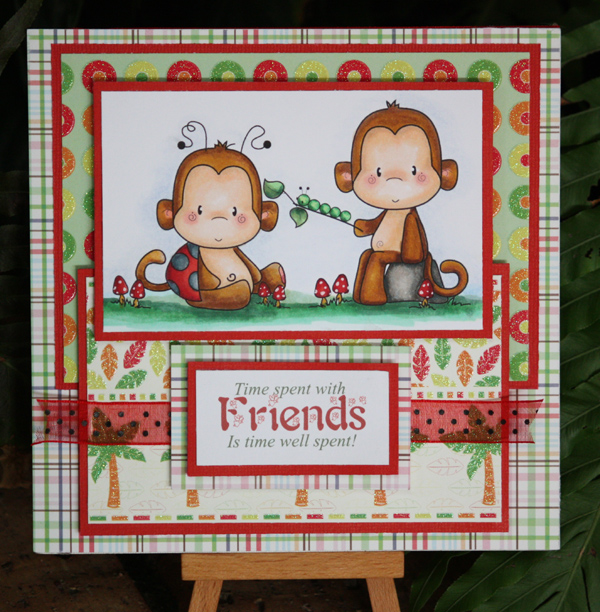 This scene uses two of the stamps, Ladybug Monkey and Caterpillar Monkey, I added a few extra toadstools by cropping one of the images down and flipping it (them??).  I just thought these little guys looked like they were friends, or maybe brothers, kicking back and sharing some quality time together. The font I used for my computer generated sentiment is even called BF Angels (if you look closely, those little red squiggles are in fact angels, coot!) 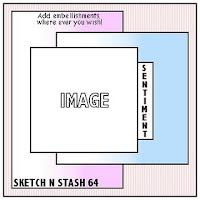 I used the sketch from Sketch and Stash this time, turning it 90 degrees.  The new stash on the card is the stamps and that lovely spotty organza ribbon.  The Crafty Pad has "Something New" as its challenge theme so I'm in there for the same reason.  The papers are from DCWV, the Animal Crackers 8" stack, I've had it for ages but this is the first time I've used it.   The photo inspiration comes from Cupcake Inspirations, I am happy to say my card is inspired by this photo in so many more ways than just colour: look at those toadstools, ladybugs and caterpillars!!  Just look at those cupcakes too, WOW!!
Sweet Stampin' has Things With Wings as its challenge this time, so I'm entering my little ladybug there.  Crafts 4 Eternity has "Embellishments beginning with R", including red; my Red Ribbon will get me in there, even if the Red card I used for matting doesn't :-)
Everything is popped up on foam dots, I DO love my foam dots, lol.
The image was coloured with Copics (yay), my other project for this release (here) was coloured with Prismacolor pencils - which I am determined to master - but you can't beat Copics for an intense finish, IMO.  Though, at least pencils don't run out at the most inconvenient moment, I am waiting for an order of refills for my Copics, but it can take three weeks for orders to get here so -Prismacolor to the rescue. 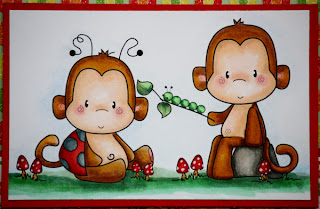 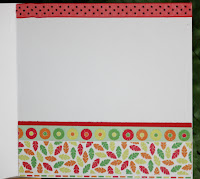 I finished the inside of the card in very simple fashion, such strong colours don't need much fuss!  I had another card all ready to photograph, then dribbled glue right across it, ruining it.  Well, trying to get the glue OFF is what really ruined it :-(   Don't you hate that....s'pose I should have had it well away from my glue, so no one to blame but myself!  I'm going to remake it and post it at a later date (I've recoloured the image, so it may be sooner than later)
Addicted to Stamps has Summertime as its challenge theme, Stamptacular Sunday Challenge is Fun in the Sun and Sundays with Chrissy has Here Comes the Sun, so my little guys are going to be entered in those challenges too.
Well that's about it for Ladybug Monkey Caterpillar Monkey and me!!  Have you checked out  my other post for today?  I'll be back on Sunday with my last GDT card for Here Come The Boys, hope to "see" you back here then.  Until next time, Happy Crafting, Dee 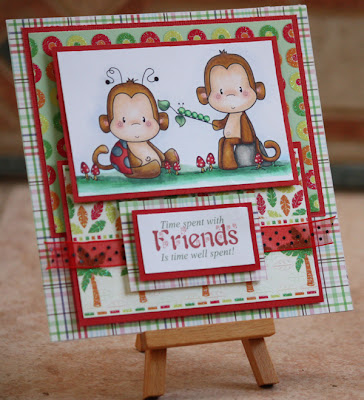 Hi sweetie, this is adorable what a cute image, love your colour choice, thanks for joining us at Sunday's with Crissy, hugs pops x

Oh this is fabulous, love it.
luv
Debby

This is so sweet. Fabulous card and great colors. Thanks for joining us at ATSC.

How true is that sentiment, an adorable card, the images are so sweet & gorgeous DP's. Thanks so much for playing along with the Sweet Stampin challenge x

Lovely job! Thank you for joining us at C4E
Michele S

me again:-) Love the colors you used, what an adorable image too! Thanks for joining us at Sundays with Crissy
XMichele

Fabulous card! Thanks for joining us at C4E this week hugs x

awwwwwwwww this is just sooooooooooo cute... I love everything about it... the image... the papers... the colours.... its just awesome ;o)

Thanx for joining in with us over at Sketch N Stash... Good Luck 8o)

Hi. Your creation is stunning but unfortunately the theme at The Crafty Pad is 'New Home', 'New Baby' etc.

beautiful card, I love how you have taken the inspiration from the photo. Thanks for joining us at Sweet Stampin this week.

Gorgeous creation. Thanks for joining us at C4E this week.
Pinky

this is gorgeous, I love your colourwork.

I love this so much!! The red and white mushrooms are adorable. So funny I had these same papers laid aside to do the ladybug and ran out of time, I am so glad, you would have put mine to shame:)

Such a gorgeous (and very professional) card, I love the colour combo, papers, image, sentiment and your colouring is wonderful...just about everything then really lol!
Thanks for joining in with Sketch N Stash.
lol Chrissie xx

This is just AMAZING! Love the image and the colors! Your coloring is just amazing too! Great job on the photo inspiration too! Thanks for joining us on Sweet Stampin!

Aw this is so cute, love these images, thanks for joining us at atsc, HUGS liz xx

This is an super cute card.

Thanks for joining us at ATSC.

so so cute card!
i love so much the papers and image!
thanks for playing with us at stamptacular sunday this week
hugs
céline SSC DT

Awwww, so cute!!!! Thanks for playing along at Cupcake Inspirations this week!

Such a cute, cute card!! I love that you have two ladybugs together. there is nothing worse than ruining a card ready to post!! I really love your papers and fab color scheme!!
Hugs~Bren

This is soooo dern Cute!!!!! Those monkeys bring a SMILE to my face:o)
Love the papers and colors you used ---very beautiful!!! That sentiment is wonderful!!!! Thanks for joining us at Sunday's with Crissy!!
Hugz

Awww that is sooo cute. I want those stamps now!!


Thanks for playing along at Cupcake Inspirations last week! So sorry I am late getting around.