Black Diamond is the name of the Swarowski crystals on this card, which I made for my son and daughter-in-law's very first wedding anniversary last week.  The Bride's attendants wore black lace and pearls on the Big Day, the Bride wore this lovely shade of Chantilly cream. 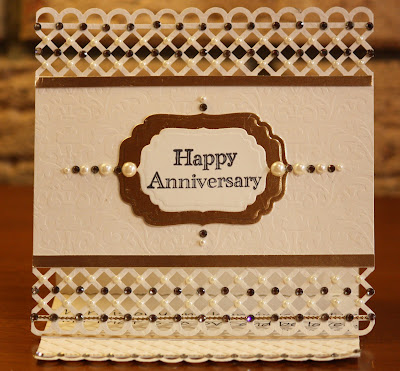 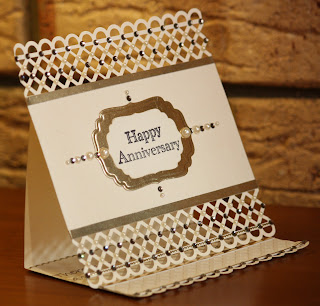 I decided to make an easel card.  I used cream coloured embossed card for the front panel, I punched the top and bottom with Martha Stewart's Garden Trellis Deep Border Punch.  The body of the card I made with textured cream card.
I glued the Black Diamond crystals, which are AB coated meaning they sparkle with all different colours, on alternate rows on the trellis on the front of the card, the rows in between had pearls glued on them.I attached a band of trellis to the edge of the bottom of the card to use as the prop for the easel, I glued crystals on one row of this trellis too. 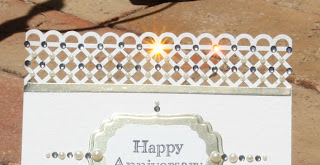 I cut a mat from gold mirror board using my Labels 4 Nestabilities, and one from cream for the sentiment which I stamped with "Happy Anniversary" from the Everyday Sentiments collection and Stazon ink. A few crystals and pearls on the face of the card completed the decoration.  The crystals are really very bling-y so I didn't want to clutter the card with too much trim. 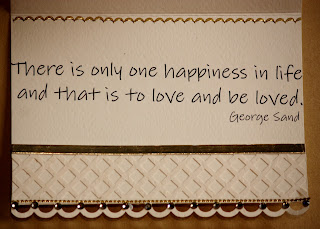 The gold mirror board edges just helped neaten the border between the body of the card and the trellis.
The text inside the card was a rub on from Kaisers "You and Me" sheet . I used some gold border stickers to edge the panel it was on, primarily because I had applied it crookedly and that seemed to be the best way to make it appear straighter!!! 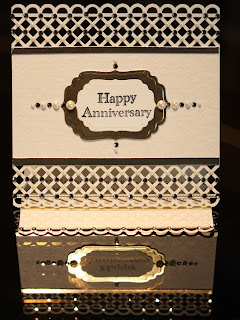 It is a pity the photos don't show up the bling: my youngest son, who is a photographer assures me it is very difficult to photograph because it relies on movement to sparkle - and as I'm not about to VIDEO my cards, you'll just have to try and get the idea from these photos:-) The one taken with the card reflected in my (somewhat scratched) breakfast table seems to show the bling off at least a bit.
I've decided to enter this card in a few challenges:
One Stop Craft Challenge has the theme "Embossing", this card has embossed paper and of course the nesties, Lexis Creations has an "Anything Goes" theme this time around, Crazy 4 Challenges #62 wants a square card.
Craft Your Passion#31 has "Double Anything" as it's theme, this card doubles A LOT: two borders, two rows of crystals per edge, two rows of pearls - all the double-ups you'd expect in a symmetrical card really! And last, but certainly by no means least, All Things Unity #18 has a Monochromatic theme this week; and this card is certainly monochromatic!
Hope you like my darling son and daughter-in-laws card as much as I enjoyed creating it, see you next time, Dee
Posted by Craftdee at Thursday, November 11, 2010

stunning card,very luxurious and elegant ,i love it,thanks for joining us at lexis and good luck in the challenges
lalkygirl x

That is exquisite!! I love how you put the crystals along the trellis intersections. Truly a lovely anniversary card. Thanks for playing along with All Things Unity.

wow!! this is stunning.. and so elegant! great job! thank you for joining us this week on craft your passion. Good luck!

this is simply beautiful, donna! love that it matches your son's wedding colors and style:) thanks so much for playing at all things unity!

WOW--beautiful card! LOVE that edging! Thanks for playing along with us over at ALL THINGS UNITY!

Such a gorgeous, elegant card! I love the colours you've used. Thanks for playing along with us at Craft Your Passion this week. x x